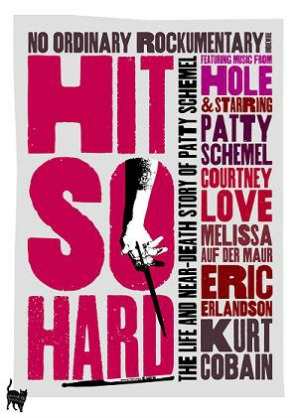 Punk, grunge and riot grrrl women: Coming to a venue near you

Next month sees the official cinema release of the music documentary Hit so hard: The life and near death story of Patty Schemel

The UK film distributor Peccadillo Pictures acquired the rights to show the film in the UK and Ireland back in the summer, and the film is produced by Todd Hughes and Christina Soletti.

It features “never before seen footage of the band in the early 1990s, including home videos of rock legend Kurt Cobain and Courtney Love” according to their press release. The film was shown at this years Leeds Music Festival and will be out soon at cinemas.

If you’ve already seen Hit so hard or are planning to, feel free to let The F-Word know what you think of it.

Back in August it was announced that Faber have acquired the rights to Viv Albertine (Slits) memoir.

As the press release confirms, Viv has an interesting tale to tell:

“Growing up in north London in the ’70s, Viv formed The Flowers of Romance with Sid Vicious at the height of the London punk scene. She then joined The Slits (as guitarist and songwriter), one of the most iconic British punk bands, widely regarded to be a huge influence on Riot Grrrl, Madonna, Lady Gaga and post-punk. The memoir will also document her life after The Slits, as a filmmaker, wife, mother, and finally back to the stage and songwriting.”

The book will be published in spring 2014, and Viv has said:

“Now I have returned to music, it feels like a circle has been completed and I can see a shape to my life. The enthusiasm for this project from everyone at Faber has given me the confidence to keep writing and developing, to tell the truth, however painful. I have to write this book now, I’ve fought it for years, but it just won’t stay in any longer.”

To read a review of Viv’s set as part of the Celebrating Sisterhood! gig in Hyde earlier this year, please click here. Viv is also an interviewee in the new editon of Helen Reddington’s The Lost Women of Rock Music a study of the women of the UK punk scene. An F-Word review of this new edition is in progress as I type. Meantime, Holly paid homage to the Slits version of ‘I heard it through the grapevine’ as part of the F-Word’s song of the day series and you can read her piece here.

From UK punk in the 1970s to US punk and riot grrrl in the nineties and beyond, Charlotte Richardson Andrews emailed me, Jess and Holly recently to let us know about an event she’s putting on in London on October 28. She will be showing the film From the back of the room a documentary on women in diy punk cultures, made by the Washington DC based filmmaker Amy Oden.

Two all girl punk bands, Skinny Girl Diet and Woolf will also be playing after the film screening. You can find out more here.

If anyone would like to review the screening, or the bands, or both please get in touch.

Image is the official UK theatre artwork designed to accompany the film Hit So Hard. It was designed by Sam Ashby

First video: This is the official film trailer made to accompany the film Hit so hard. It features interviews and archive footage from the film, and participants include Patty Schemal and Courtney Love

Second video: This is the promotional video that was made to accompany the Slits 1979 single ‘Typical Girls’. It features the band performing the track in a very exuberant fashion on a pavillion in a park in London, the reactions of bemused onlookers are also included.

Third video: This is the official film trailer made to accompany the film From the back of the room. It features interviews and archive footage from the film, and participants include Alison Woolfe and Kathleen Hanna