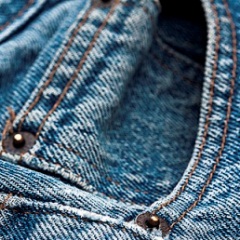 A coat of one’s own? Compulsory heterosexuality on the high street

This is a guest post by Ellie Gore, who is a postgraduate researcher at the University of Birmingham.

Last year, high street retailer Topshop came under fire for selling misogynistic t-shirts that compared women to dogs and made jokes about domestic violence. Looking for a new jacket this week then, I wasn’t surprised to find another Topshop product – the ‘boyfriend coat’ – sticking firmly in my feminist craw. ‘Boyfriend’ fashion has been around for a while, often describing jeans with a baggy and low-waisted fit. The name suggests something big, comforting, and protective – all the ‘manly’ qualities of your boyfriend obviously. To assuage any style concerns, there is also a frisson of sex. Don’t worry about being unglamorous girls! It’s that sexy just got out of bed and wearing his shirt look.

So ‘boyfriend’ fashion belies a number of deeply heterosexist and gender normative assumptions. Firstly, and most obviously, that all women buying a coat in Topshop sexually desire men. Secondly, that these women are/want to be in a relationship with a man. Thirdly, that sexual preference has implications for the clothes you wear, that biological sex, gender, and sexuality are sartorially linked. ‘Boyfriend’ clothing works the primacy of heterosexual relations into the very fabric of the high street. This is compulsory heterosexuality, almost literally, written on the body.

If, as Judith Butler argued, gender is ‘performative’, an act that is socially constituted and constructed, then nowhere is this more manifest than the world of fashion. The strict separation of men and women’s clothing departments, the choreographing of different gender styles, trends, and fits, the creation of particular ‘images’ and ‘looks’. Can a colour be more or less ‘feminine’? Can a manufactured scent be intrinsically ‘male’? The answer, we are repeatedly told, is yes.

But this is not just about dualist gender categories. ‘Boyfriend’ coats, ‘Ask the missus’ shoes, ‘Not your daughter’s’ jeans – a heteronormative view of gender and family pervades mainstream fashion. This narrative relies on out-dated gender stereotypes – scripting women as girlfriends, wives and mothers – and effortlessly erases decades of critique from feminist, lesbian, gay and transgender activists alike. Not to mention important advances in equality legislation. Over the past few years, organisations like Pink Stinks have challenged the gender stereotyping of children’s clothes and toys. When it comes to high street fashion, this is just the tip of the political iceberg.

A friend asked me recently why I buy men’s jumpers and t-shirts. I told her that they are often cheaper, more robust, and are as likely to fit me as women’s clothes. Indeed, many people, whether male or female, can probably testify to the difficulty of finding clothes that fit. Bodies come in such a diverse range of shapes and sizes, both within and across the sexes, that producing gender-specific clothing defies physiological sense. Moreover, in a fast-moving global marketplace, consumer tastes are shaped by increasingly complex factors. When deciding what to wear, people don’t just consult some pre-determined gender dress code. I’m reluctant to fall back on the ‘business case’ argument so beloved of social commentary in the neo-liberal age. But, questions of equality aside, it does seem that retailers are missing a trick. Deconstructing the fashion gender divide may have economic benefits, as American Apparel’s adoption of unisex styles suggest.

This begs the question: by promoting an idea of femininity straight off the pages of Cosmo, what are Topshop trying to avoid? If they really want to gender their product, why not call it ‘boy coat’, plain and simple? Were they worried that doesn’t sound sexual enough? That it seems too masculinised, too butch, too, dare I suggest, gay?

Whatever the reason, we should remember that clothes don’t have genitals. And even then, the relationship between biological sex and gender is much more complicated than commonly thought. So come on Topshop, let’s shelve the everyday heterosexism and call a spade a spade. That product doesn’t belong to my boyfriend, or my girlfriend, or even my queer polyamorous lover. It’s an inanimate, over-priced winter coat of dubious ethical provenance and quality. Put that on your label instead.

Close-up photo of the pocket of a pair of jeans by Muffet, shared under a Creative Commons licence.