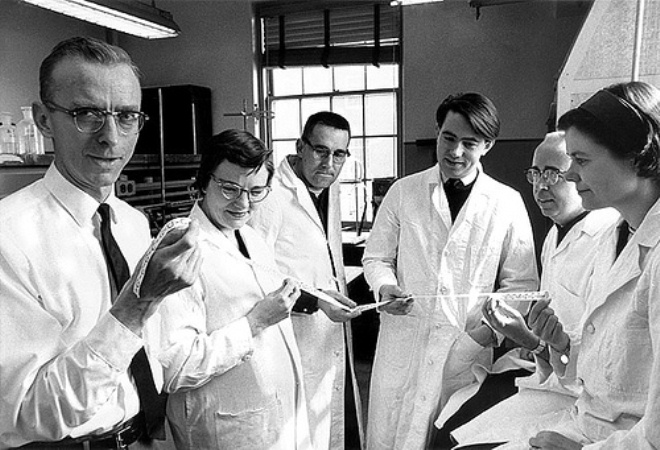 This is a guest post by Luzia Troebinger, a PhD student living in London.

Earlier this year, the European Commission produced a commercial intended to make careers in science more appealing to women. Originally appearing in connection with the ‘Science -It’s a Girl Thing’ campaign, the video (see below) was downright offensive and prompted numerous enquiries as to whether it had been an attempt at irony (it wasn’t). The only positive thing that can be said about it is that it disappeared rather quickly.

The film features a serious man in a lab coat, sitting in front of a microscope. In come the ‘girl scientists’, in very short skirts and very high stilettos. Serious man scientist stops his serious scientific efforts to stare at them in a very disturbing way. Silly girl scientists being their silly selves giggle, drop stuff all over the place and experiment with lipsticks and other cosmetics.

Aside from all the obvious things wrong with this, there is a more subtle point here: the assumption that the problem is women not being interested in science.

I don’t believe this is true.

Women do find science interesting. Women love technology. And we are every bit as capable of studying science and engineering as men are.

The problem lies elsewhere. Women are often deterred from pursuing a career in science or engineering because of the ‘boy’s club’ atmosphere encountered in the workplace. It is the playground mentality of ‘no girls allowed’ that discourages a lot of us.

As an engineering student, I was often put off because lecturers would make blatantly sexist comments under the guise of ‘innocent banter’, which was directed at the overwhelmingly male audience and in fact served as an indication that they were either oblivious to the fact there were female students in the audience or, worse still, actually meant to cause offense.

In a seminar on computer vision, the speaker used an image of a ‘woman’ from a computer game as an example for a pattern recognition problem: pattern woman = breasts-buttocks-bee-stung-lips. The speaker’s comments (‘This is a shape that I’m sure we all recognise…’, wink wink) made it even worse.

But this is only the tip of the iceberg. After graduating from university, I worked as an engineer in the R&D department of an international company. I worked there for less than a year, and it wasn’t exactly a walk in the park.

My role was to program a particular type of sensor, as well as to help with any problems that occurred in the ones that were in operation on sites across the globe.

I wrote the program for the device. I pretty much took it apart and put it back together. I worked with this thing every day and wrote large parts of the manual. I pretty much WAS that sensor, and it was me.

However, a lot of male technicians who worked with it on site would still rather call a male engineer from a completely different group to ask questions – simply because they couldn’t take advice from a woman.

My supervisor told me that I couldn’t travel to the testing site for product tests, because I was a woman and this was ‘a building site environment’. As such, he thought I could only go there if a man would accompany me.

This same person also tried to take credit for my work using the ‘you-are-a-woman-and-need-me-to-represent-you’ approach. I refused to be passive and complained about his behaviour to our boss – all I got was a ‘mark your territory’ speech from my boss, and my supervisor went out of his way to trash-talk my work and me as a person, pretending I was an incompetent, lazy snake in the grass.

To make matters worse, our company’s employee representative, who was supposed to be the first point of contact in case of any such problems, was a sleaze who would leer and make inappropriate comments about my body. However, I felt that if I said something about it, I would be in an even worse position since I would lose his support – something that had happened to a female colleague of mine.

And then of course there is always the pressure of suddenly being made a representative of the entire female population – that is, if you aren’t twice as good as the best of your male colleagues, this is taken as proof that women just can’t do science or engineering.

So I think rather than taking the ‘you-can-be-a-scientist-and-look-hot’ approach, we ought to be thinking about how we can make sure that we provide an adequate, comfortable working environment. And, dear European Commission, lipsticks and lab coats have nothing to with that.

The black and white photo shows a group of male and female scientists in white lab coats in a lab holding a long, thin piece of paper that looks like a tape measure. They are members of the team of ARS and Cornell University researchers who first determined the molecular structure of RNA. Photo by mars_discovery_district, shared under a Creative Commons licence.