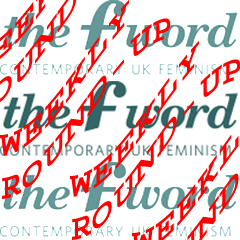 This week’s closing video is “The Moth and The Moon” by Jo Mango:

IMAGE ATTRIBUTION AND DESCRIPTION: The image at the head of this post is The F-Word’s text logo, overlaid multiple times with the phrase “weekly round-up”. It was made by Helen, based on the original TFW text logo.