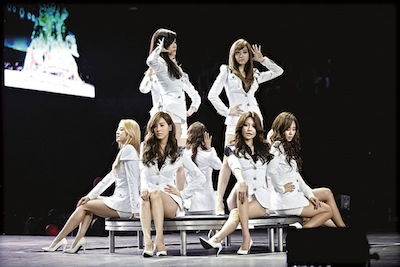 I was struck by one big question when looking through the diverse line-up of this year’s London Korean Film Festival: can independent cinema combat the misogyny in the mainstream? The biggest LKFF to date showcased films that presented gender in both liberating and regressive ways. It also excitingly took place against the backdrop of ‘Gangnam style’, South Korean rapper Psy’s hit, becoming a world-wide sensation over the summer. Fittingly, the most striking contrast could be seen between the many films about K-Pop (Korean Pop) – the youngest, glossiest and highly successful South Korean cultural export – and obscure arthouse queer films like The Weight by Jeon Kyu-Hwan.

Where K-Pop generally features wealthy, desirable, popular young people, Jeon’s films focus on those living in the margins of Seoul.

Whilst K-Pop is highly commercial with a huge domestic audience, many Korean arthouse films are shown only abroad, for example at the Venice Film Festival, where The Weight recently won the Queer Lion. As if commenting on this, the film opens with glossy images of Korea’s Busan International Film Festival captioned: “This is not his world” as it cuts to the nocturnal, consumptive, hunchback mortician who is the film’s lead. The life of his sister Dong-Bae, a prowling, badass transgender woman, is a world away from those of women we see in many K-Pop videos.

Gender issues are highly contested in South Korea, a country where women’s lives have changed rapidly since the 1950s. In less than 100 years, women have gone from being heir producers in a feudalistic, colonised culture to being workers in an economy ranked 15th in the world in the UN human development index. To put this in perspective: France is ranked 20th, Finland – 22nd and Britain 28th. As South Korea increasingly exports its culture, Korean film and music become a primary arena where modern gender confrontations are played out.

Psy’s ‘Gangnam style’ is a prime example. Non-Korean speakers will most likely be taken by the jubilant horse-dancing and arresting rhythms. They will understand “Hey, sexy ladies!” but not Psy’s listing of the sometimes bizarre qualities required of his dream girl. Amongst puzzling gems of lines such as “a classy girl who knows how to enjoy the freedom of a cup of coffee”, his most yearning refrain is for a “beautiful, loveable” girl:

A girl who looks quiet but plays when she plays

Desirable South Korean womanhood of the lyrics and embodied in the female dancers is quite contradictory: both sexually performative and constrained. The girl has to be visibly very sexy, but only when the right time comes: when her boyfriend thinks it is the right time. Hyuna – the 20-year-old female singer who features in the video with Psy – who is 34-year-old and married with kids – embodies this contradiction. Seemingly going against some of Psy’s modesty standards, she pole dances in hot pants. Probably what makes this OK for Psy is that he is the only person watching her.

Without access to the gender reassignment operation, Dong-Bae remains trapped in a kind of eternal girlhood: she is forced to sew clothes in the attic of her mother’s boutique with no end in sight

At the other end of the spectrum, The Weight shows a transgressive, transgender woman who is definitely not sexy at “the right time”, Gangnam style. Hers is a story rarely told in mainstream media, east or west. Like the ultimate “beanpaste girl” – a girl who eats bean stew frugally to save money for designer items – she definitely stamps around the streets of Seoul in beautiful clothes but with no money. 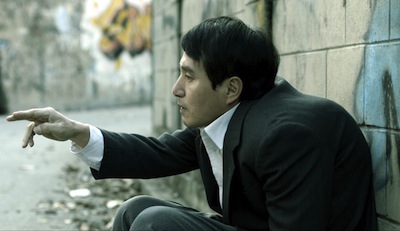 Violently rejecting unwanted male advances (look out for what she does to the off-duty American soldier!), she turns to her older stepbrother, hunchback Jung, who tries to help by providing money for a gender-reassignment operation: but this is thwarted by their cruel, intolerant mother.

The stepsister is locked in a Confucian conundrum due to the fact that her mother does not accept her trans identity. “This is my son. Surgery and hormone shots don’t make him a woman,” she says. In traditional Confucian culture, a woman stays in girlhood servitude to her family until marriage, which in modern South Korea often means women work to provide for their families until marriage. Without access to the gender reassignment operation, this option is an impossibility for Dong-Bae: trapped in a kind of eternal girlhood, she is forced to sew clothes in the attic of her mother’s boutique with no end in sight. In her own words, her undesired genitalia render her completely non-functioning as an adult human: “Whilst I still have this, I’m not a man or a woman. I’m just a bug.”

The sympathy between the hunchback and his transgender stepsister highlights the film’s greater fascination with non-mainstream bodies, whether transgender, deformed, disabled, old, prostituted or even dead. Earlier in his career, Jeon made the Town Trilogy. His representation of Seoul in these films shows non-standard male bodies are excluded and female bodies that become too available – at the wrong time – are likely to be attacked.

His female characters, transgender or not, are fearsomely played and always have agency, even when circumstances leave them with limited options. They are never merely projections of other people’s desires and traumas

In The Weight this idea is most clearly represented by shocking images of necrophilia. The body of a famous young Korean actress, murdered by her husband for infidelity, is further violated in the morgue by a disabled stranger. Her husband’s body (he subsequently committed suicide) lies next to hers in the morgue, as if to highlight both his complicity and his current powerlessness to protect his wife. Mortician Jung, who only just carefully put “pretty make-up” on the actress who gave people so much pleasure with her “beautiful body”, watches these events on CCTV, silently shocked.

Korean film industry in the 1980s was allowed to relax censorship of sexual imagery to reduce frustration with the high levels of prevailing political censorship that held sway. In this dark scene, Jeon seems to be commenting ironically on the way mainstream Korean film (and music?) present the bodies of women as available purely for the pleasure of the consumer, when the consumer alone decides the time is “right”.

Unlike in Jeon’s earlier films, the style of The Weight is less realistic. The bodies Jung cares for in the morgue are re-animated to ballroom dance with him; a white, animated bird shoots out of a gun instead of a bullet. The dead bodies serve more as symbols, representations of ideologies taken to their full conclusion.

Jeon shows us that deep wounds administered by a harsh, uncaring, misogynistic world can never be simply forgotten. Filmmakers must take back the tools that inflicted those wounds and cut out a new world of their own

Victimised women are a common trope in Korean cinema and Jeon’s films certainly have plenty of those. It is difficult and uncomfortable to tread the line between necessary depictions of abuse and mere pornography that plays along with mainstream stereotyping. The F-Word addressed this very issue in the film Compliance last month. But The Weight shows us that Jeon’s negotiation of that line is necessary. His female characters, transgender or not, are fearsomely played and always have agency, even when circumstances leave them with limited options. They are never merely projections of other peoples desires and traumas. The film carefully and imaginatively depicts the logical, realistic conclusions of the kind of exploitative content that you often see in K-Pop videos.

Towards the end of The Weight, we watch the drunken mother listen to a melancholy old Korean song, crooning: “The deeply cut wounds will eventually be forgotten.” To which her resentful daughter mutters that the “old bitch is mad”. In a more subtle way, Jeon shows us that deep wounds administered by a harsh, uncaring, misogynistic world can never be simply forgotten. Filmmakers must take back the tools that inflicted those wounds and cut out a new world of their own.

The first image is a still from I AM: SMTown Live World Tour in Madison Square Gardens and features K-Pop band Girl’s Generation. Two remaining images are from The Weight. All images courtesy of LKFF.

M. Lý-Eliot is a singer and poet, with an interest in 19th century Britain and East Asia. Currently stunned by Psy’s recent collaboration with MC Hammer at the American Music Awards, she is hoping to catch all the films she missed at this year’s Korean Film Festival at the Korean Cultural Centre’s new mediatheque.