A song that fitted seamlessly into the rock’n’roll nostalgia film that was, and is, American Graffiti the initial attraction of the teenage Brenda Lee would be hearing that voice tearing out of the diminutive figure on stage. Lee is only 4″9″, and she was ten years old when she first started singing professionally. “Little Miss Dynamite” fast became her nickname following the recording of her 1957 single ‘Dynamite’.

What I love about ‘Sweet Nuthin’s’ is its combination of rock’n’roll sauce and its more wholesome rockabilly nuances. Lee’s vocal technique is fully honed by this point, and she is able to go from nice girl crooning to rock’n’roll queen growling throughout this seemingly simple tale of a girl and her date whispering “sweet nuthin’s” until she is called inside by her mother.

Of a similar fiery nature is ‘Let’s Jump The Broomstick’, though Lee is perhaps still best known for ‘Rockin’ around the Christmas Tree’ and ‘I’m Sorry’ which are rather less raucous in tone. 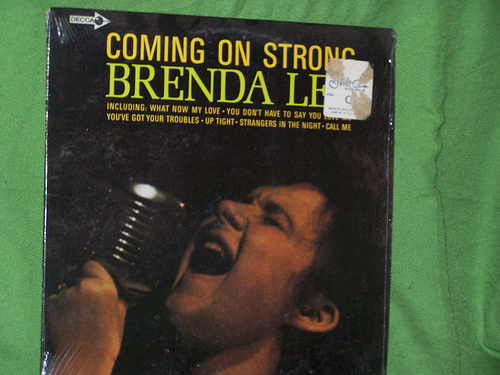 She has sold over one hundred million records, and in 2002 published her autobiography Little Miss Dynamite: The Brenda Lee Story