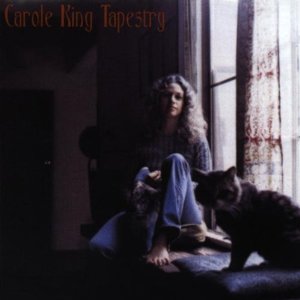 As half of the songwriting partnership of Goffin and King, Carole King wrote more pop hits in the 1960s than most people can probably count, amongst them the Shirelles ‘Will you still love me tomorrow?’ Little Eva’s ‘Locomotion’, and the Chiffons ‘One Fine Day’.

‘So far away’ is from King’s second album, the famous Tapestry, one of the biggest selling albums of all time.

While the big single from the album was ‘It’s too late/I feel the earth move’ (the former later covered by Dina Carroll, the latter by Martika), ‘You’ve got a friend’ became a hit for James Taylor, who played on Tapestry, and was also recorded by Dusty Springfield. Another of the songs to be taken up by other artists is ‘(You make me feel like) A Natural Woman’ which was a hit for Aretha Franklin.

Because of the albums success, and the length of time it spent in the album charts and on radio playlists, Tapestry has become synonomous with a particular moment in the early 1970s. So much so that it was used on the soundtrack to Sofia Coppola’s adaptation of Jeffry Eugenides’ The Virgin Suicides, where it became a symbol of female teenage angst and despair.

While it is sad and world weary, I wouldn’t say that ‘So far away’ isn’t in itself angsty or despairing, despite the impassioned cry of ‘doesn’t anybody stay in one place anymore?’ that is a constant refrain throughout. The lyrics reflect the isolation of travelling, in this case, touring. The rootlessness of the 70s touring musician, travelling from place to place but never really seeing anyone, or staying anywhere for very long. And missing people.

41 years after it was written, it still perfectly encapsulates those feelings, feelings many of us have had or will have in the future.

Image is the sleeve art for Carole King’s album Tapestry

Video commentary Video is of Carole King performing ‘So far away’ as part of a concert for the BBC in 1971. James Taylor plays guitar as King plays piano and sings