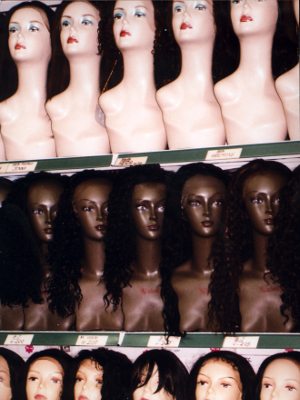 The Museum of London recently held a large photography exhibition and realised that the majority of works they were showing had been photographed by men. Hoping to rectify this, they invited Dorothy Bohm to exhibit a display of colour photographs that focused on female subjects. Accordingly, Women in Focus was commissioned and designed: an exhibition that aims to highlight the many roles of women both behind and in front of the camera.

The exhibition consists of 33 photographs taken in London over the previous two decades. For a show about women, I noticed that several of the photographs are not of living, breathing women, but instead of shop mannequins and Grecian statues – the images that women are compared to and contrasted against on a daily basis. In this way, Bohm’s work questions the common assumptions and ideals held up about women, asking not only what we should look like but also whether appearance trumps behaviour when women come to be defined.

One striking image shows a young child, at an age where biological sex is not immediately identifiable, walking along the street. Ahead of the child are some posters tacked to a public green box. The top layer of photos advertises a new single by the winner of the 2003 Eurovision Song Contest. She lies stretched out and scantily clad with her long hair floating about her.

Underneath are posters advertising Charlie’s Angels. Here, young women are portrayed as physically active and assertive, as they mount powerful motorbikes or grip large guns. Yet despite this seemingly more positive representation, there is notably little difference between the two images, as these latter women still rely on tight, revealing clothing and heavy make-up to appeal to their audience. Bohm has clearly noticed that women may only wield weapons if they’re wearing high-heels at the same time. This is the world the child will grow up in: one where women are told that their appearance defines other peoples’ perception of them, and that their actions mean little in comparison. 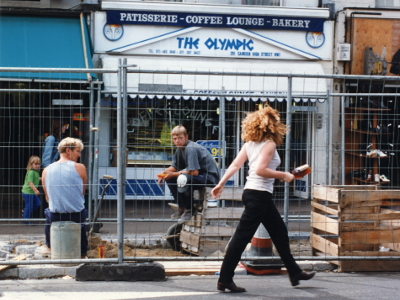 Bohm captures a wide range of women in her photos and the exhibition is successful in demonstrating the sheer variety of women to be found in London, a diversity that is not generally visible in the everyday images of women available to us in advertising and the media. Her photos are labelled for place and date and it is interesting noting the split between different geographical areas of London, which tend to attract women who choose to dress in similar styles. The alternative youngsters hanging out by the Tate Modern one year clearly think that their look is individual, though they are merely replaced by the hipsters in a photo taken in the same spot later on in time.

Even when choosing to reject mainstream trends, many of the women in Bohm’s photo fall into other traps that the fashion world has set for us. Many of us are unable to make individual choices as we remain subconsciously affected by societal assumptions and expectations. The photos Bohm takes of women at work show that we ought to be judged by what we do rather than only how we look but this is not common practice yet.

Bohm’s work constantly reminds that much of what we wear, whether revealing or otherwise, really hides or disguises our natural bodies, creating an artificial image to present to the world

The promotional material accompanying the exhibition focuses on the idea of gender alone but I found it interesting that race is also very visible in Bohm’s work. One photo shows a woman in a bright red head-scarf, long-sleeved black jacket and bright red trousers pulling her pink and blue-clothed daughter behind her. In an increasingly polarised world, this girl may grow up to a choice of concealing Islamic dress or the mindless purchase of the high street’s latest fashion. Which option will afford her greater liberty in later life? Neither seems that positive.

A black woman at a make-up kiosk on Oxford Street bends over an advert for “Flawless Beauty” – beauty is available for everyone, so long as you buy the correctly coloured make-up to cover-up your natural tones and features. Bohm’s work constantly reminds that much of what we wear, whether revealing or otherwise, really hides or disguises our natural bodies, creating an artificial image to present to the world. 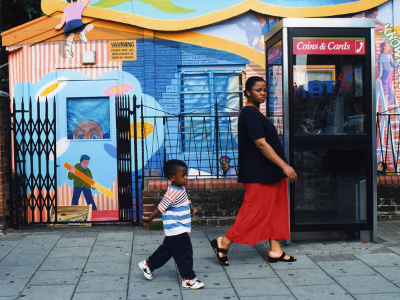 The exhibition leaves me with one big question. Did the women in these photos know that they were being photographed? Are they any more than the usual objects? Bohm notes that she thinks being a female photographer allows her to capture images that male photographers cannot, that her work is more emotional and people-focused as she has a natural empathy towards other humans and her subjects trust her. She works by capturing sudden moments, not by posing models or repeatedly photographing scenes. I wonder if she asks consent from the women she snaps to be displayed, or if she thinks that her art serves a greater good, as it more accurately represents the women of London than the other images of our age do. Her photos definitely seem to be those of an impartial observer – she manages to avoid criticism or judgement and to allow the clothes and gestures of the women photographed to speak for themselves.

I am struck by one final observation. Even the Grecian statues and mannequins Bohm has photographed, those marble and plastic figures that are intended to represent idealised beauty, whatever that is, have been altered. They have been accessorised. They are no longer complete without a fancy hair-piece.

Women in Focus is showing at the Museum of London until 17 February 2013. Entrance is free.

Shoshana studied English so knows more about theatre than photography. However, if you’ve already seen Women in Focus, she highly recommends the Wildlife Photographer of the Year exhibition at the Natural History Museum if you fancy seeing some snaps of animals: big, small, cute, fierce, endangered and more