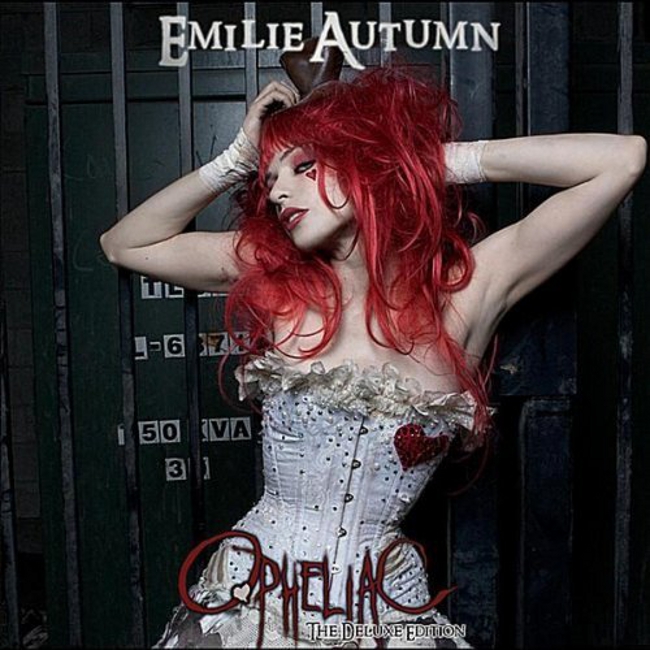 Emilie Autumn, the violin-playing, pink-haired neo-Victorian musician who makes Courtney Love look like a manufactured pop princess, is no stranger to backlash against her appearance but she takes a different slant in ‘Thank God I’m Pretty‘, a sly look at the dark side of beauty privilege.

Accompanied with harpsichord and strings, ‘Thank God I’m Pretty’ has the classical strains that underpin most of Autumn‘s work and reminds the listener that this is a problem that has plagued women since time immemorial. With every “free drink I never asked for” and “the occasional admission to a seedy little bar” come “invitations to a stranger’s car” and the constant threat that someone might move from objectification to violence.

It also makes it harder for Autumn to do her job – while admitting that her image relies on being “stockinged and curled”, the emphasis on her looks “only means that when I sing you’re jerking off, and when I’m gone you won’t remember”. Beauty makes her ephemeral, means that she exists only when she’s performing and distracts listeners from her music. Her talent is questioned by the implicit assumption that her success comes from her appearance and that she relishes being on display – when she’s surrounded by admirers less interested in her work than her body. “It’s lucky” she notes wryly, “I hate to be taken seriously”. By the end of the song, she’s moved from tongue-in-cheek to pissed-off sarcasm: “I think my ego would fall right through the cracks in the floor/If I couldn’t count on men to slap my ass anymore.”

Autumn is known for putting on shows that resemble burlesque acts or the Victorian music hall more than traditional gigs; her back-up singer/dancer troupe, The Bloody Crumpets, provide titillation for the audience as much as they any musical accompaniment. In ‘Thank God I’m Pretty’, she doesn’t apologise for the elaborately-constructed image that means “everybody thinks that I’m a fucking Suicide Girl“, and nor should she have to. Still, her tongue-in-cheek sexuality plays with the trappings of Victorian femininity and drags it into the 21st century rather than exploring it in any depth. Along with her legions of fans who call themselves ‘Plague Rats‘, she fetishises the corsets and asylums meant to keep troublesome women in their place, reclaiming them as a badge of honour for “wayward girls” rather than challenging the status quo that labels them as such.

‘Thank God I’m Pretty’ is an unusual inclusion in Autumn’s repetoire in that it explores conventional male/female power dynamics without her usual gothic grandeur. With her layers of artifice stripped away, Autumn seems less the neo-Victorian maenad and more a tired, pissed-off woman who recognises that being desirable isn’t all it’s cracked up to be, even when she’s reaping the rewards. This corset isn’t one of her choosing, and there is little that even she can do to glamorise it.

Image description: Cover of the the Deluxe Edition of Opheliac (the EP ‘Thank God I’m Pretty’ is taken from and a prelude to the Opheliac album). This shows a bright red-haired Emelie Autumn, wearing a white corset style dress, in front of black bars and a black door. Her hands are on either side of her head.

YouTube clip shows a static shot of the above.

Update (20.54, 23 December 2012): Reference to Emilie Autumn as a cellist changed to violinist. Thanks to Francesca Lewis for drawing our attention to this error!