Natalie Collins set up Spark and is an independent consultant working to prevent and respond to violence against women and enable others to do the same. She is also the creator of DAY, an innovative youth domestic abuse education programme. She speaks and trains on understanding and ending domestic abuse nationally and internationally. 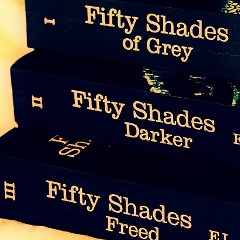 I feel it’s time to tell the world. I married a Christian Grey.

I met him when I was 17, at a party. He gave me all those “Mr Grey” looks. He paused regularly during the conversations we had and left me wondering what he really meant. He always had that smile, the one like he was laughing at me… I got all those fluttery bits in my stomach and every time I looked at him I felt my heartbeat in my mouth.

He was the most beautiful man I had ever met and it was the first time I had ever felt such deep desire for anybody.

Maybe at this point I should say I also was a virgin. Not only was I a virgin, I was a virgin who didn’t believe in sex before marriage. I was Ana Steele, but younger, and more naïve.

As the party went on, his secret smile created such a fluttering within (perhaps it was the whisperings of my inner goddess), but I also felt I needed to avoid his intense, dark gaze. I felt just like Ana, I needed to “get away from him.”

I left the party and imagined I’d never see him again. I dreamed of him, but within a week, I had got him out of my mind and was getting on with my life.

Until he asked my friend for my number. (This was before everyone had mobile phones, or I’m pretty sure he would have just found me by using tracking software on his computer). I was utterly shocked! What would a beautiful Adonis like him want with me? I was just a silly little girl!

We met and walked for hours. It was. Oh. So. Romantic.

And then…he kissed me. It was beautiful and lovely and everything was perfect, and yet I felt I needed to get away as quickly as possible. But my subconscious was telling me, “Don’t let him go!”

So our relationship began. He wanted to know everything about me. He took up every second of my day and submerged himself in me. Just like Mr Grey he whisked me away from my friends and wanted to be my whole world. He told me of the abuse he had suffered as a child! The poor man, broken and abused, and he needed me!

I’m about to get to that…

Just like Christian Grey, he began pushing me to do what he wanted sexually. I continually resisted, and yet he pushed and pushed until I gave in.

Then, when I totally belonged to him, he sat me down, just as Christian did to Ana and told me he was too bad for me, that he would hurt me and destroy me and that I should stay away from him.

“I’m too dangerous,” he murmured, “Just stop seeing me.”

I cried some more and told him I couldn’t. I loved him. And he relented and said that it was my choice. If I wanted to stay with him, I could. But whatever he did afterwards was because I had made that choice. Oh my. My very own Mr Grey!

And my Mr Grey held me to that.

When he forced me to kiss another guy, he held me to it.

When he tried to force me to have an abortion, he held me to it.

When his desire to have younger, teenage victims led to him becoming a registered sex offender, he held me to it.

When he abused me sexually in every way possible, he held me to it.

When he raped me when I was 6 months pregnant and my baby was born three months premature, he held me to it.

Honestly, Christian Grey is not the ideal man. He’s an abuser and he will destroy every woman he meets. My ex-husband was one of the Christian Greys of this world and he broke me, body and soul. I believed my love could change him. I believed his childhood had damaged him and I could fix him, but it is not childhood trauma that causes men to abuse. Abuse is a choice.

To those of you with a Christian Grey, who are loving him into changing; it won’t work.

To those of you desiring a Christian Grey, he is abusive; if you meet a man like him, run away as fast as you can.

To those of you who have escaped a Christian Grey, I applaud you for your bravery.

Read more at 50 Shades is Domestic Abuse and on twitter @50shadesabuse.

Photo of the three Fifty Shades books in a pile by ellebnere, shared under a Creative Commons licence.