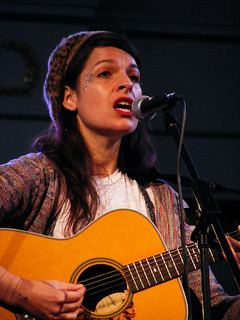 Song of the day: Jesca Hoop – The Kingdom

Raised in California, now resident in Manchester, ‘The Kingdom’ is taken from Jesca’s 2009 debut album Hunting my dress. Unlucky enough (or lucky enough, depending on how you look at it) to emerge at the same time as Laura Marling was every music magazine’s folk girl of choice, Hoop has a loyal following both in Manchester and across the UK as well as the US, and while her music does have roots in folk she has always been experimental in her approach to making music.

2012’s The house that Jack built has been released on Bella Union in the US, previously home to the excellent Laura Veirs, and Hoop and her band are a tight unit who do everything for themselves, up to and including tuning and, presumably, roadieing. Those who sign up for the Hoop mailing list receive missives from Jesca, not press releases from PR’s. As such, Hoop wasn’t exaggerating when she remarked at her Manchester gig in June that the band were more a punk band than a folk band.

This experimental independent approach is exemplified by the free spirited ‘The Kingdom’. With a sparse finger picking intro, it starts as folky minimalism before gently changing tack as the percussion comes in. Mysticism and ritual appear to be being invoked, a mood reinforced by the ritual imagery used in the accompanying video. Hoop’s lyrics are often complex, and she is an artist capable of intricate storytelling as well as being in posession of a voice that travels the octaves easily and is capable of invoking any number of characters, ranging from a young child to an older woman.

Not as explicitly feminist as, say, recent song ‘Peacemaker’, ‘The Kingdom’ shows a rising songwriter honing her craft and flexing her songwriting muscles.

Image of Jesca Hoop performing at the annual Sounds from the other city festival in Salford in 2010. By Man Alive!, deployed via a flickr creative commons licence

Video commentary: You can watch a ‘behind the scenes’ video here, which provides some commentary to the video and to the themes behind the songs. Jesca plays a series of characters to act out the songs themes of death and rebirth and heaven/earth, including an angel, a gargoyle, a shamaness type figure, and a pagan goddess type figure. Fire is a motif, as is dancing.