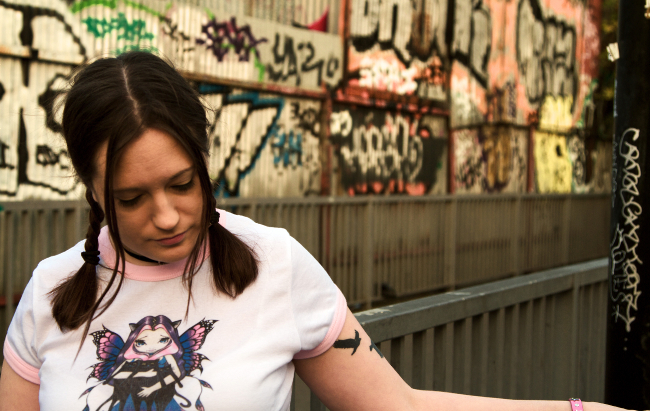 Are feminists in the mainstream under pressure to be politically subtle in the current so-called post-feminist climate? This is the concluding installment of Holly’s two-part interview with Gaptooth about the song ‘Ladykillers’. You can read the earlier blog entry here

This is the second installment of a two-part interview with Gaptooth about the forthcoming release of ‘Ladykillers’ on 10 December. You can read the first blog entry here.

It’s been recently suggested that there isn’t an obvious feminist theme in current popular music, with the connected implication that “strong” women somehow don’t need to go around “shouting” about feminism. I think this makes ‘Ladykillers’ and its explicit expression of feminist frustration seem quite daring. Do you think feminists engaging in the mainstream are under pressure to be politically subtle in the current so-called “post-feminist” climate?

I’ve been promoting the Ladykillers single over the past few weeks and one local radio station came back and said the lyric was too blunt, that the song was “necessary” but that their listeners wouldn’t be into it. I fully expected to get that kind of reaction from some people when I decided to release it as a single. I definitely feel there’s a trade-off between being political and being commercially successful, though I don’t think that pressure is anything new.

Even where women’s empowerment has been a theme in popular music it has tended to be very superficial. Beyonce, for example, has written all these songs about being an empowered woman but says she doesn’t like the word ‘feminist’, she prefers to call it ‘bootylicious‘ (cringe). The whole ‘girl power’ fad was never really about addressing inequality or ending patriarchy. It was a marketing strategy. Of course, there are plenty of artists out there who actually are writing music with a feminist message but they don’t tend to achieve commercial success. But there are other ways to define success – I would argue that a band like Le Tigre, for example, have achieved huge success even though you don’t see them topping the charts.

I read in a Nightshift review that you used to be a Studio Engineer for Truck Records. Did you ever experience any sexism in the job? [Post-interview note: I had forgotten the comment Gaptooth made here when I asked this!]

Once I was walking to the studio and was overtaken by a car full of young men who wolf-whistled at me as they drove past. I wasn’t entirely surprised when I turned up at the studio to find out that they were the band I was recording, but they were a little shocked to find out that I was the studio engineer! I’m not sure who found it more awkward, them or me but there’s also something quite satisfying about defying people’s expectations.

Finally, is there anything you’d like to say about the furry person at the keyboard or the box-headed person dancing in the video?

The concept for the video was dreamt up by my friend Steve Dawson – he’s a TV comedy writer and he filmed and directed it. It was a challenge to come up with something that was interesting and could be made with no budget, but I think he did a great job. For me, the giant that’s jumping up and down and knocking me around represents patriarchy and that’s where the meaning of the song comes through. The puppet and the boxhead man were just a bit of fun really – Steve’s idea was to create a kind of magical black space where it feels like anything could appear. We wanted to make a video that did justice to the song’s message but didn’t come over as too po-faced, which maybe comes back to the earlier question about pressure to be a bit subtle. I’m really pleased with how it turned out. You’re actually the first person to ask what the weirder bits of the video are all about – I’m surprised more people haven’t asked about that!

Gaptooth will be playing at 7.30pm at The Dublin Castle, Camden on 8 December, supporting Joy Revision, Belter and The Stagger Rats.

YouTube description: This shows Gaptooth with a black and white guitar against a black background. As the shot gets further away, an amp can be seen in the background and there are two giant feet in blue trainers on either side of Gaptooth. One of the feet begins tapping on the line “We’ve been learning how to jump through hoops” and walks away briefly on the line “until we’re isolated”.

The feet jump and cause a disturbance around Gaptooth as the chorus comes in (with clouds of dust and sparks). This contunues throughout the instrumental before they walk away again on the second verse. A person in a yellow furry costume walks on with equipment.

The feet in trainers cause another disturbance on the second chorus and the puppet character walks back on to adjust the equipment. Gaptooth turns and looks behind her on the line “If you’re not above cheating” where a box-headed person is dancing. The film appears more grainy at this point and Gaptooth’s shirt changes from fuchsia with black checks to red with black checks. The film appears normal again after “Then I guess we’re not moving forwards.” From 3.15 to the end, we just see Gaptooth performing without the feet, puppet or box-headed person.

Picture on frontpage shows Gaptooth in plaits, white T-shirt, black jeans and pink bracelet with silver stars, sitting with her left arm over her knees against a grey and engraved wall (possibly a memorial) with graffiti on.