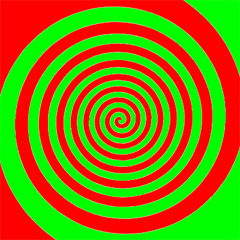 This week’s closing video is “Image is Powerful” by Cameron Russell at TEDxMidAtlantic 2012:

Image attribution and description: The Public Domain image at the head of this post was made by Helen. The image is of interlocking red and green spirals.