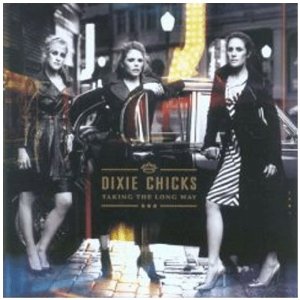 Song of the day: Dixie Chicks – Taking the long way

The title track from the Dixie Chicks 2007 album, ‘Taking the long way’ can be read on a number of levels. On one level it is a song about female independence, and a desire to follow your own path. On another level it can be read as a series of wry observations on the bands situation four years after the George Bush/Iraq war incident.

In 2003, ten days before the start of the Iraq War, the Dixie Chicks were peforming in London. During the introduction to ‘Travelin’ Soldier’, singer Natalie Maines informed the crowd that the band were against the war, and that she was “ashamed” that Bush was a fellow Texan.

Word got back to the US, following a review of the gig in The Guardian and the band were frankly mauled by press on both sides of the atlantic.

The reaction was so excessive, so savage, so gleeful that it earned itself a chapter in Dorien Lynskey’s eulogy to the protest song, 33 Revolutions Per Minute despite the controversy being spurred by a chance remark, not a song.

That the band were forced to say sorry is bad enough (especially given that they essentially weren’t, in that they didn’t suddenly become pro-War or pro-Bush)but they were also effectively exiled from the country music scene, a scene that they had always had their roots in.

The debut single from Taking the long way was ‘Not ready to make nice’, which explicitly addressed the Bush/Iraq incident, but despite the bands defiant stand, they have been on long term hiatus since 2008, and you can’t help but worry about that.

Video commentary The video shows the band performing the song ‘Taking the long way’ as part of a yahoo! music session.