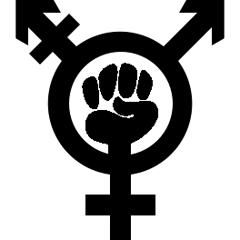 Feminism is for everyone – including trans women

The fallout from the recent flame wars instigated by two mainstream UK journalists seems to continue unabated and I will admit to having been unprepared for the range, depth and intensity of feelings the whole debacle has generated in many who read the original articles and tweets. Many have already commented in various places online; similarly many of the issues raised have been covered elsewhere.

With that in mind it seems as though it’s time to move on, to turn away from the distractions and attempts to divide feminist women amongst themselves. However, one aspect which the furore has highlighted and which seems to have gone largely unremarked is the old question of whether there’s a place in feminism for trans women. My immediate answer would be an emphatic yes, subject of course to clarification of which strand of feminism we’re talking about. Clearly some feminisms will never be open to trans women, even if we should be foolish enough to want access to them – an obvious example would be the fundamentalist version which seems to have arisen from the second wave feminism of the 1970s and whose followers are sometimes referred to as TERFs (Trans Exclusive Radical Feminists).

To my mind, such narrowly focused feminisms long ago rendered themselves irrelevant and redundant by their failure to recognise that feminism is not a monolith carved in stone and writ large in letters of fire. Rather it is a movement which, at its best, is unafraid to draw on the better parts of the past and, at the same time, face the present and construct a more contemporary and relevant strand with which to move forward into an unknown future. In that context, it’s hard to see how trans women – or any other self-identified women, for that matter – could not be included.

Feminism is about a better set of values in which gender loses some of its power of oppression, in which separate and distinct voices are not only heard but also listened to, and in which a better set of values is followed. That is what we who are trans can gain from them – but perhaps much more importantly now, it is also something we can give back to them. [Via]

But this is nothing new: many trans women have long had constructive relationships with the more progressive feminisms and to see that, we only need to consider the common ground we share, particularly in the fight against the essentialist notion that biology equals destiny and the consequential sexism that it enables. The concept that a child born with a penis and assigned a male sex at birth is somehow entitled to receive numerous privileges denied to everyone else is simply ludicrous. If for no other reason, bringing an end to systemic sexism is surely a goal to which all feminists, be they trans or not, can aspire. It seems clear to me that the often-voiced fear that trans women must become assimilated into existing feminisms is misplaced and that the various emerging feminisms are broad enough and flexible enough to enable all women, trans or not, to not need these kind of ‘ownership’ issues even to exist.

Viewed through this particular lens, it seems to me to make perfect sense for trans and non-trans women to unite in the struggle for liberation, to pool our resources, share our experiences in a process of forming alliances and coalitions and begin, finally, to throw off the shackles of those culturally enforced binary stereotypes which oppress us all.

Image attribution and description: Trans feminist fist symbol made by Helen G from images found at Wikipedia (here and here). Both original images are public domain and so is this. If using elsewhere, please ensure correct attribution.