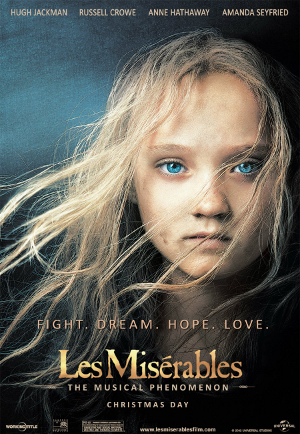 Do we need warning?

Les Misérables is a much-praised musical likely to be viewed by millions. It also contains material that some individuals might find triggering. In this guest post, Jane Fae asks: do we, as the British Board of Film Censors seems to think, now need specific information warning us of this? Or are triggers so individual as to make such an exercise a waste of time?

Les Misérables is a much-praised musical likely to be viewed by millions. It also contains material that some individuals might find triggering. In this guest post, Jane Fae asks: do we, as the British Board of Film Censors seems to think, now need specific information warning us of this? Or are triggers so individual as to make such an exercise a waste of time?

I went to the cinema last week. “Les Mis”, of course. And it was every bit as wonderful as my friends had warned me.

Not only that but the body handing out film classifications, the BBFC, seemed keen to alert me to a possible downside as well.

Warned? Well, yes. Because alongside the music, the revolutionary passion, the love unfulfilled and the brilliant comedy of Sacha Baron Cohen and Helena Bonham-Carter was something much, much darker. A story of women’s survival and economic degradation, with a plot set-up that hinged, absolutely, on violence against women’s bodies:in this instance, submission to a sexual encounter that, while superficially consensual, clearly lacked agency.

I cried loads, though that is hardly surprising. Unusually for such a mainstream film, this one seems to have forgotten how to “make you laugh” and focused almost exclusively on making you cry. It succeeded. In the ladies’, afterward, I have never encountered so many women all at once fixing smudged make-up or wiping away the shadow of tears.

So far, so commercial. Still, it set my mind wandering. The first thought, which I imagine will be regarded with suspicion by those who distrust Hollywood and all its works, is that this film is an interesting alternative route into discussion of the issues above. In the downfall of Fantine (spoiler alert!) you have, in one short parable: economic necessity, individual degradation, women turning on women and -in Fantine’s eventual selling of herself, first in parts (hair, teeth), then as a package (prostitution)- violence and questions over the nature of consent.

(The latter I discussed soon after with a friend, whose views I greatly respect. I was surprised to find we took different positions on some of these issues: whether consent without economic agency was really consent. But then, that’s the point. The debate didn’t altogether change my mind but it did encourage me to think more widely.)

Back, though, to the issue of warnings. I was deeply affected by the scene in which Fantine surrenders the last of her dream. So, I thought: given the nature of that narrative, should the film have carried specific trigger warnings? Because someone who had themselves been on the receiving end of violence, of abuse, would read it in much the same way as me.

Or perhaps not. And again I am glad that I discussed this before rushing into print. Yes, one friend came back: that scene was mildly triggering. Maybe a warning of sorts would have been appropriate. No, came back three or four others. Triggers aren’t that simple. Sometimes, a scene that closely resembles their own experience can do it. More often, though, triggers are much less specific. A word. A phrase. A sound. A gesture. In the end, they are as varied as human experience and therefore warnings about specific scenes or films misses the point. Because almost ANY film could prove triggering.

This is of particular relevance in this instance, as the BBFC, supported by the Cinema Exhibitors’ Association recently launched its “Insight” service. This goes beyond the usual warnings about how films may contain sex, nudity, violence, etc. to give far more specific detail around individual scenes.

The Insight around Les Mis includes: “Scenes of moderate violence include stabbings with bayonet blades, truncheon blows to the head and the impression of gunshot impacts.”

And in respect of the significant scene centred on the theme of prostitution: “In a more serious scene, a young single mother reluctantly prostitutes herself to a man once she has exhausted other options to earn the money she needs to keep her daughter. As she lies back and a man lies on top of her, she weeps as the man’s expression implies sexual pleasure.”

Is this helpful? I’m not so sure any more. For now, therefore, I’m just hanging this out there: an issue that feels to me like it needs further exploration – and one on which I feel hopelessly inadequate to draw a conclusions.

Image description: Poster for 2012 film version of Les Misérables showing the young Cosette (a character in the story) against a light blue background. Four of the actors in the film are written across the top of the poster in the following order: Hugh Jackman, Russell Crowe, Anne Hathaway and Amanda Seyfried. Under Cosette’s chin are the words “Fight, Dream. Hope. Love”, followed by the film title, “The musical phenomenon” and, at the bottom, “Christmas Day”.