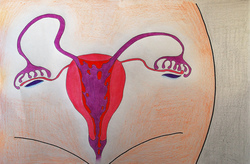 I got most of my information about periods when “The Tampax Lady” came to my school. Boys and girls were separated out and the boys were told about sex by our Home Economics teacher. We girls were given a talk about menstruation, my main memory of which, while it was not at all graphic, involved several girls fainting and being taken out of the room.

We were about 13, I think, when we had the talk so it was already too late for many. We also got given some tampons and a booklet called A Time For Answers which I scoured avidly for explanations of why my periods were much longer than everyone else’s and found nothing (although, to be fair to them, it took numerous doctors and surgery to work that out).

Through Lisa Chalkley at Live, Madness, Art, I found an intriguing video made by Disney in 1946, The Story of Menstruation. This intriguing document wasn’t much different to the education about periods that I received in the 80s and 90s, and although some of the advice would be given differently now, it is impressively straight-talking and myth-busting for its time. The most disturbing aspect of the video is certainly the baby which is over-feminised to the point of seeming to wear lipstick and mascara.

From 1945 to 1951, Disney produced a series of educational films to be shown in American schools. How to bathe an infant. How not to catch a cold. Why you shouldn’t drive fast. Disney covered these subjects in its educational shorts, and then eventually got to the touchy subject of biology and sexuality.

What was your education like about menstruation? How did your school or parents handle the topic? Feel free to share your story in the comments!

[The image is a drawing of a cis woman’s reproductive system, done with marker pens and pencils. It is called Menstruation and was created by Areta Ekarafi and is used under a Creative Commons Licence]