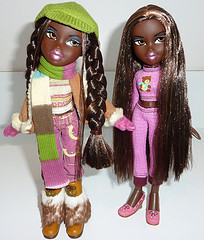 Most of all mi love mi browning

I often see hip hop music and rap culture talked about in ways that makes me cringe, especially in feminist circles, where the conversation is often set up in ways that forces me to choose between my race and my gender. Usually the subject is Misogynistic Rappers or Those Poor Video Girls with the expected tropes of objectified Black women and how to save us from our evil men. Recently however I saw a twitter argument between my two favourite female rappers that highlighted two issues that are rarely talked about in feminist circles in regards to rap, and that’s girl hate. There was the standard bravado where skills were slighted, success – or lack thereof – insulted, and something more disturbing used as a source for insult, skin tone. We Black girls, and indeed other women of colour, fall prey to our own brand of girl hate that sits outside the realms of fake gamer girl hate, the myths of the ‘normal’ girl. Our girl hate is often ingrained in us from young and reinforced by the media; I’m talking about Colourism.

Colourism is a term originally coined by Alice Walker in 1982, and refers to discrimination based on the social status attributed to skin tone. In a lot of societies this means that the lighter the skin tone the higher the social status associated with it. I don’t think that when Walker wrote about colourism, she would have thought that 20 years on ‘white passing privilege’ would still be as powerful; however within many Black families and friendships colourism is not only tolerated but actively practiced. Growing up in Jamaica, many of the popular girls were popular simply because they had the lightest skin. It’s an issue that highlights the importance of an intersectional approach to feminist ideology, as it’s often found where misogyny meets racism, both internalised and external.

In media geared toward the Black consumer the message is reinforced. The ideal nuclear family unit often consists of a dark skinned man with his light skinned wife, their children mirroring this pattern in ads and sitcoms, in music rappers talk about finding a ‘red bone’ girl and in dancehall reggae songs where mc’s praise the virtues of a ‘browning’. We dark skinned girls often internalize the misogyny and colourism and in turn attribute all kinds of undesirable sexual behaviour to light skin girls. I’ve heard everything from light skinned girls being “home wreckers”, to them being more inclined to be “slutty”. Our skin tone has become not only our sexual currency, but the foundation of our self esteem. Lesbians of Colour are not exempt from this either- I know studs that think that light skinned girls are only for messing around with or they don’t want to “settle for” a dark skinned woman, perpetuating the colourist idea that our worth depends on our skin tone.

Many Black feminists like myself often avoid talking about this- it is often seen as not as important an issue in comparison to others, but I think it’s time we confronted it head on. Avoiding it hurts the women in our communities, hinders us when we try to take on publishers that sell us digitally lightened magazine cover stars, and the cosmetics companies that profit from skin lightening products to the expense of our health. It’s not until we tackle it head on, will we truly stop feeling the one drop.

Image is of two dark skinned and black haired ‘Bratz’ style dolls. It was taken by Flickr user dolls.inc and is shared under a creative commons license.