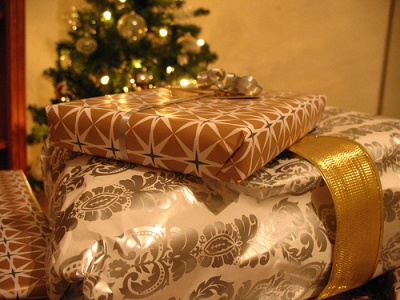 Christmas time has finally passed, and I am sure there are many people who are giving a sigh of relief. There may be a percentage of women now sitting at home staring at some gifts which have been unopened and unused, maybe even some bright-red ‘Santa’ frilly bras from a significant other. It seemed there were lots of shops and magazines encouraging people (presumably mainly male) that lingerie is the perfect Christmas gift for the average woman.

There is more than one thing wrong with this gift idea. For example, the belief created by advertising that this is somehow the best gift you can give a woman – seriously? You might start thinking that there is no more to a woman than being sexy. A woman must have the perfect bright red undies in order to feel sexually attractive in her own skin; she can’t just be sexy naturally, she has got to dress herself up like a Christmas present.

Another problem with these advertisements is that they only portray a slim percentage of female body types. Instead of women ranging in size, weight, shape and – often – ethnicity, there is only one image being broadcast to millions of young girls. This is very worrying; it isn’t healthy to impose this one image of sexy on these girls, there needs to be diversity just like there is in the population. Given that the UK average is a size 14-16, maybe more models should be of this size to reflect the average, instead of showing an ideal that may be unachievable to many like me (I’m naturally curvy and have a prominent love of food). Just to be clear, I am not saying if you are skinny you are unattractive, I am saying that there is a culture in place that makes women feel crap if they are not skinny.

There is some thought that this gift may actually be more for the person who gives the gift, which means that the person who is giving thinks it’s okay to not feel guilty for making you a living dress-up doll. Unless you specifically ask for lingerie, would you really want to receive it? It’s understandable if you ask for it, or if your other half knows that it’s definitely something you’d like, but I think in some cases it suggests that your other half may have been taken in by the sexist culture of most advertisements. Why give a woman something that she may not actually want? Also, why does a woman have to be sexy, shouldn’t there be more? Shouldn’t us women be equal to men and our gifts be connected to our interests instead of our appearance?

If my future partner handed me a set of underwear in a horribly ill-chosen colour, I would probably throw said items back in his face and then lock him out of the house. I would have thought if you were interested in me, you would have actually noticed there is more to me than my body, like my many interests such as books, Big Bang Theory, Hello Kitty, poetry, writing, children’s movies, art, painting, sketching, and so on. It’s not like there isn’t a lot to choose from and I would NOT ask for underwear. The media is forcing this ideal and this perception that women are to be judged by their appearance not by their intelligence and wit. Yet men are tough, to be respected in these advertisements and their underwear is just a necessity, not a tool with which to better their appearance.

It seems very unequal that the ideal man’s gift is the newest gadget. Even in catalogues, the gender-separated gift idea sections show clothing, underwear, home decorations and kitchen utensils in the woman’s section. My particular favourite (which I saw in a store magazine) is napkin rings! Yet in the male equivalent, there may be a nice blazer or shirt surrounded by funny mugs, fake moustaches, the fanciest tablet, laptops, games, maybe even a TV or an MP3 player. It’s nice to see that after all this time there is still obvious reinforcement of gender stereotypes – women aren’t interested in anything that isn’t to do with their appearance or their house.

Maybe it isn’t the lingerie that is at fault, maybe it is the companies and the sexist imagery being presented in the media. I don’t have a problem with the lingerie itself, it’s a practical necessity that most women need. To be honest, I cannot go without a bra, but I don’t see men’s underwear being widely advertised as a way of becoming instantly sexy.

It’s everywhere, even in adverts not produced by clothing companies. It’s worrying that children can see these images and without anyone questioning it, they will accept it as normal… as right. I seriously thought we were nearly past this but seemingly my appearance means more than my interests when it comes to my future partner buying me gifts.

Photo of gold gift-wrapped presents in front of a Christmas tree by Alice Harold, shared under a Creative Commons licence.