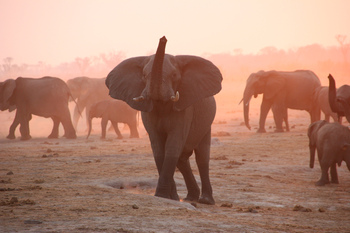 It’s that time of the week again when we sum up some of the stories we would have liked to cover but didn’t have the time or the capacity. Links in these posts do not imply any kind of agreement or endorsement, they are simply things we thought might be of interest.

There has been some controversy on Twitter about this smear test campaign ad, posted by @welsh_gas_doc – what do you think?

With the following links, do bear in mind that external websites are not necessarily safe spaces, so please take care when visiting them. If you have spotted any other interesting links or articles this week, please feel free to share them in the comments below.

To end the round-up, enjoy listening to Carelys Carreras playing the third movement of the Mozart Clarinet Concerto with The Vienna Philharmonic Women’s Orchestra, conducted by Izabella Shareyko. An all-female orchestra, conductor and soloist are pretty much unheard of, and they are good!

[The image is a photograph of a herd of elephants, with the matriarch of the herd in the centre of the shot, raising her trunk. It was taken by Terry Feuerborn and is used under a Creative Commons Licence]