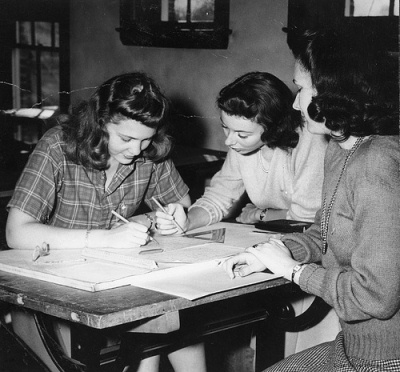 Where are all the girls in white coats?

This is a guest post by V. S. Wells, who keeps her first name a closely guarded secret, except in official emails. V is in her last year of school, eagerly awaiting the chaos of university, and tweets here.

Mary has been a constant presence in my life since I was three. She is a social butterfly who takes weeks to reply to a text. She is a second-year student, a maths genius with no sense of budgeting. She is a contradictory human being, and an anomaly: she is a female Engineering student.

Women are under-represented in the high levels of almost any field you care to name – politics, business, Formula 1 drivers – but it is possibly most apparent in the startling lack of women in science. At the top level, female scientists and engineers are few and far between – and even at university level, the vast majority of science students (with the exception of Biology) are male. While not a scientist myself, I am surrounded by them: my brother studies Physics and his girlfriend has an MA in Chemical Engineering; my father studied Computer Science back in the mid-70s, and my friend Beth is an aspiring Mechanical Engineer.

Everyone has a story about the overwhelming male presence, from Beth’s experience at Cambridge’s university interviews (“I met one other girl who wanted to do engineering!”) to my father’s quasi-chauvinistic ramblings about back in his day, when girls doing science seemed to be treated as something mythical akin to elves or hobbits. Indeed, Mary is outnumbered too, being one of only two girls in her fourteen-person seminars.

This isn’t news. This is just an extension of that same sexism that has always pervaded society: men do “important” work, like science and politics, and women procreate – or, if they must, they write essays (but don’t expect them to be on the front pages). Originally it was thought that the sexes’ brains were wired differently, but that theory has largely fallen out of popularity.

Startlingly, this idea was put forward by then-President of Harvard, Lawrence ‘Larry’ Summers, in 2005, who opined that there are “issues of intrinsic aptitude” between men and women. In short, men are just better suited to studying science (and girls should probably stick to soufflés and needlework). But this still doesn’t explain why there’s such a dearth of women in science.

Dr Ben Barres vehemently disagrees with the “Larry Summers hypothesis”, as it is dubbed. He has a unique perspective, as he is transsexual, and went through school and university presenting as Barbara. He argues that the difference isn’t in innate ability, but rather the socialisation of girls. Talking to The Wall Street Journal (in an article with problematic pronouns), Barres spoke about how he, as a perceived female undergraduate student at MIT, was automatically seen as inferior to the swathes of men on the same course. Through school, Barbara was taught that boys were better at science – and now he is perceived as male, he is treated with far more respect than when he presented as female.

Barres is right: to say girls are inherently inferior in science is plain ol’ misogyny, as perpetuated by our friend, the Patriarchy. Studies (with nice infographics) show that telling a girl she is bad at a subject will cause her to perform worse in it – and this is endemic across the education system. Sally Ride, America’s first female astronaut, founded programmes to get children into science: if the message taught to young girls was not “you’re a girl, so therefore bad at science”, but rather “you’re as good at science as you want to be”, then maybe we could start to bridge the gender gap.

Mary might be outnumbered six-to-one, but she takes it in her stride. She told me once that she that she was like “gold-dust”: she found that the rarity of female engineers has made them a precious commodity. Of course, this then takes us into the seedy world of tokenism – is a token female engineer better than none at all?

We should refuse to bear it. We should teach girls that physics and chemistry are cool. The upper echelons of the scientific community are still dominated by straight white cis men, but the consolation is that they are aging: they are a relic of an outdated era, where men still cling on to outdated notions of pseudo-Victorian “separate spheres” and disguise sexism as concern.

As times moves forwards, therefore, we can hope that the women who graduated ten or twenty years ago will start making their way up through the ranks, and we will have a radically different picture of academia in ten years’ time. One where, if Harvard want to ask why women are under-represented in science, they might actually ask – shock horror – a woman.

The image shows the first two women to receive degrees in engineering at Duke University – Marie L. Foote and Muriel G. Theodorsen, in 1946 – along with another woman. They are sitting around a wooden work bench with pencils and drawing materials. Photo from Duke Yearlook, shared under a Creative Commons licence.