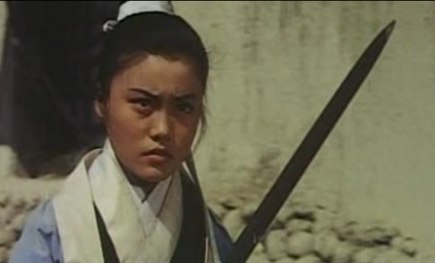 A couple of days ago, I asked on Twitter if anyone knew of any feminist bloggers writing about wuxia films (a genre of Chinese period drama that revolves around martial arts and heroism). I was retweeted a few times – implying I’m not the only one interested – but didn’t receive even a single recommendation.

That was a bit disappointing – I want to be reading knowledgeable writing about wuxia from social justice bloggers.

Over the holidays, I watched three versions one film: it all began in 1967 with a Taiwan movie called Dragon Gate Inn.

The plot is quite complicated, and involves a plan by a high-powered ‘eunuch’ to ambush a political rival at an inn in the middle of the desert, back in the Ming Dynasty. I won’t try and explain the plot or who everyone is, but one of the highlights is Polly Shang Kwan as half of a brother-sister team come to interfere with the ambush:

But in 1992 the movie was remade in Hong Kong by as Dragon Inn, the female parts are beefed up and multiply.

Brigitte Lin plays a female warrior, presenting herself as a man, who rescues two children. The brilliant Maggie Cheung, meanwhile, plays the inn owner – who spends all her time trying to seduce people (including, kind of, Brigitte Lin’s character).

In 2011, a 3D ‘reimagining’ of the movie, The Flying Swords of Dragon Gate, was released. And it has even more decent female roles.

In fact it includes a phalanx of other female warriors whose presence is – powerfully- unremarked upon.

Zhou Xun plays Ling Yanqiu. Here she is in the middle of rescuing Jin Xiangyu (Mavis Fan), a palace maid who is about to be executed because she has got pregnant:

Then there is Kwai Lun-mei, playing Zhang Xiao Wen – “tribal princess” (yes, it’s quite possible there is something problematic going on here!) 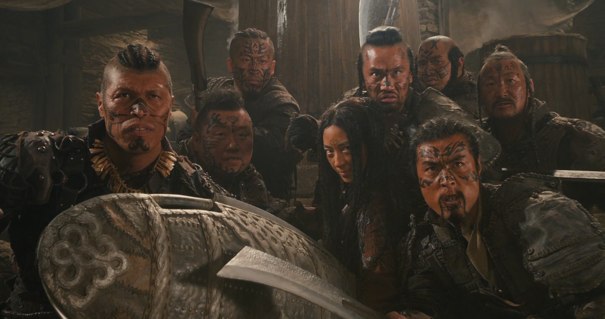 She had just got into a fight with these guys, who are looking for the palace maid: 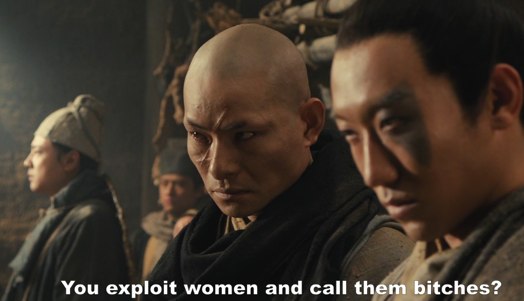 And, yes, the movie passes the Bechdel test.

As Catherine Gomes points out in this essay, female warriors have always been part of the wuxia tradition- and the folk tales and operas that inspired it. Even now, in post-Buffy, where ‘kick ass action heroine’ is itself a problematic stereotype of Hollywood, this feels refreshing.

Haywire came out of Hollywood in 2011 – it was notable in part because it starred former mixed martial artist Gina Carano. It’s excellent, but yet again she is one lone kick-ass woman – I’m not sure from memory she even has a single conversation with another woman, let alone anything that would scrape past Bechdel.

Watching the Dragon Inn movies, I can’t help but wonder about the layers of context that I am missing. Obviously, I’m viewing these films through a limited, ahistorical gaze, and I’m certainly missing a lot (not least, what Chinese feminists make of it.) In fact, my general ignorance of everything about China probably can’t be overstated!

I’m writing this despite this massive gap in my knowledge because I think it’s always worth flagging up good entertainment with decent female characters. Crouching Tiger, Hidden Dragon got a lot of English-language commentary because it was a big international release, but before and since there have been loads and loads of wuxia films come out that would be interesting to talk about and read about.