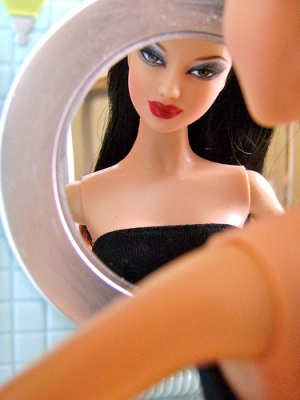 Young women, sexuality, and the internet: why are we surprised that it has all gone tits-up?

This is a guest post by Helena Horton. Helena is a first year Philosophy undergrad at the University of York. Her hobbies include incessantly tweeting, trying to be a journalist, playing the clarinet and weeping in the bath to Joni Mitchell. More of her writing can be found at The Yorker.

Young girls, in their early and pre-teens, are really given a tough time by society. On the one hand, they are sexualised from a young age, but on the other, they are expected to ignore society’s influence and if they attempt to express their sexuality in any way, they are victimised and ridiculed.

One of my followers on twitter recently showed me this picture, which shows two girls wearing home-made t-shirts with the phrases “No dignity, no virginity, get in or get out” and “Why do drugs when you can do me?”, and asked me my opinion. These girls are fourteen years old and are being subjected to cyber-bullying and ridicule because they are acting provocatively. People are calling them ‘sluts’ and shaming them for expressing their sexuality. There are many examples of this behaviour on the internet, from Tumblr’s ‘topless Tuesday’ to the provocative profile pictures of pre-teens on Facebook.

Why are we victimising these impressionable young girls? We all know what it is like to be their age, trying to form an identity amongst the mixed messages given to us by our peers, our education and the media. I don’t know why people are surprised by the fact that some girls take on the message that the media gives them: that in order to be worth anything, a girl has to be ‘sexy’.

We sell them push-up bras, thongs, ‘Paris Hilton kits’ and Cosmo magazine, and still expect them to act like perfect little virgins. They keep track of the female role models that the media gives them and see that they are judged on how ‘sexy’ they look, and how these seemingly perfect celebrities are pushed off their precarious pedestal if they dare to go out without putting makeup on, or wear something unfashionable on the red carpet.

People are labeling young girls who pose suggestively on the internet, participate in ‘topless Tuesday’ on tumblr, or send a boyfriend a ‘sext’ because they were coerced into it, as ‘stupid’ and ‘sluts’. They say that these girls have no self-respect because they act the way that they do, but these girls have never been taught to respect themselves or their bodies. Go into Hamleys and look at the difference between the ‘boys’ and the ‘girls’ toys, with sexualised Bratz dolls and makeup kits for the little girls, and science kits and stethoscopes for the little boys. Pick up a magazine aimed at pre-teen girls and look at the messages that they send out. Hell, turn on the television!

Yes, the things that these girls do are misguided but that is because they haven’t been given any coherent guidance! Sex Ed at school, in the main, doesn’t teach young people how to express their sexuality in a healthy and safe way. Society doesn’t like it when women in general express their sexuality at all! Why are we telling these girls to ‘be sexy’ but not why or how? Why are we giving them this message at all?

Television, in the main, perpetuates this culture. The movies aimed at young women all too often feature a popular, blonde, large-breasted cheerleader and another, usually bookish, unpopular, girl who is bullied by said cheerleader. What does she do to overcome the bullying and become popular? Get a popular man, ignore her bookish ways and usually have a makeover to ‘become sexy’. She kisses the guy, the credits roll, and voila! We have told the next generation of women that in order to be popular and successful, they have to be ‘sexy’.

‘Ignore your brains, girls! Inner beauty isn’t a thing! Be sexy! Get a man!’, society screams at them through a Disney Princess-shaped megaphone. And what is the way to a teenage boy’s heart, readers? Are we still surprised that young girls are acting sexually? In a quest to get this ‘Prince Charming’, a young girl sends a half-naked picture of herself via SMS to a boy she thinks that she loves. He has probably asked her for it, and she probably thinks that he cares for her. He shows his friends, the picture circulates, and who do we blame? The coerced or the coercer? Many would blame the girl.

To conclude, before we get upset and holier-than-thou about the young women who act provocatively via social media, we should look at why they are acting this way. How do we expect these girls to ever have the ‘self-respect’ that so many berate them for lacking, when we tell them to ‘be sexy’ then victimize them when they actually try to do this?

Image of a heavily made-up Barbie doll with long black hair looking in a mirror by TheDollObserver, shared under a Creative Commons licence. The doll is apparently the Barbie Back to Basics Asian Kira doll.