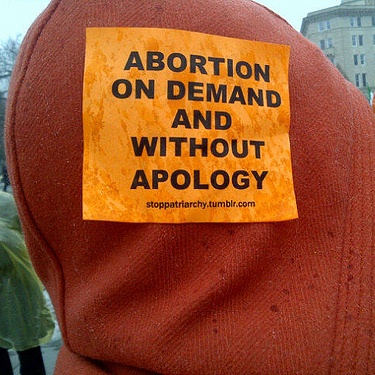 Isobel Greener exposes the sexist values behind the anti-choice position that women can only have abortions if they have been raped.

At the back of my mind, there are always the conversations and debates and arguments I’ve occasionally had, and the things I “should” have said. Usually, I’m good at letting it go, but a few months ago I had a brief debate around abortion rights which won’t leave me alone.

I’d been doing a lot of reading and thinking on the topic back then, around the time when Mehdi Hasan’s article on abortion had stimulated a massive debate. I put up a link on Facebook to one of the articles I’d found especially interesting, along with my declaration that I believe very strongly in easy and stigma-free access to abortion. A female friend immediately commented, stating the opposite viewpoint, on the basis that “foetuses are people” and that killing them is murder. Abortion should be impossible, she said, beyond twelve weeks’ gestation, and even then, only allowable in extreme circumstances, such as rape.

It didn’t strike me at the time, but this get-out clause “you can have an abortion if you were raped” is so freely used that its underlying meaning gets lost. My generally left-wing, pro-human-rights friend obviously thought it enormously unfair to force a woman to carry and give birth to her rapist’s baby. However, this doesn’t sit comfortably with her argument about foetuses being people and abortion being murder. A baby conceived through rape is, after all, still a baby.

In the context of her argument, which focuses on the foetus rather than the woman’s rights and autonomy, the only difference between a baby conceived through rape and one conceived through consensual sex is that the woman is more likely to not want the pregnancy.

There are innumerable reasons why a woman may not want a pregnancy, but what my friend seems to believe is that a pregnant woman cannot make this decision for her own reasons. We need legislated, state-approved reasons, because women can’t be trusted to decide for themselves. Pregnant by accident? It’s a human being and you have no right to destroy it. Pregnant by rape? Oh go on then, you can get rid of that one.

What it boils down to is the age-old practice of shaming and punishing women who are sexually independent. Whether or not a foetus can be considered a person is open to debate, but the idea that this changes according to your opinion of the conduct of the woman carrying the foetus is transparently sexist bullshit.

Photo of a protester’s head entirely covered in the hood of their orange jacket, with a sticker reading “ABORTION ON DEMAND AND WITHOUT APOLOGY stoppatriarchy.tumblr.com” stuck to it, by World Can’t Wait, shared under a Creative Commons licence.