This is a guest post by Amy Masson, the Women’s Officer at the University of Sheffield Students’ Union. 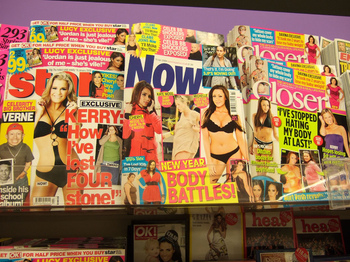 I am a feminist with an eating disorder. My eating disorder often makes me feel like a bad feminist. My obsession with my body, my hatred of my body fat is at odds with my politics. Constantly comparing my body with those of other women jars with my fierce opposition to objectification. My fear of certain foods and my addiction to the images in celebrity magazines seems totally opposed to my feminism. I am angry about the fact that I do these things and that I feel this way.

I always used to think that concern about one’s body image was a vain individualistic distraction from the real issues that women face. It was easy to do this as someone who was comfortable in her body. Yet the personal is the political and so I can’t deny that my Eating Disorder and my anger about it is both real and political.

I am not sure why I developed problems with food and body image and I’m not an expert on Eating Disorders. I do know that my low self-esteem coupled with my unwavering perfectionism probably has something to do with it. However what I have found most interesting have been my experiences of coping with ED and attempting to recover in a culture where the diet industry is everywhere and women’s bodies are constantly scrutinised. I feel like our relationship with food and our bodies is so fundamentally screwed up that it’s difficult to know what normality is. In fact I don’t think I know any women that haven’t either had an eating disorder, been on a diet or been dissatisfied with their body.

This week is Eating Disorders Awareness Week and I wanted to do something positive to speak up and speak out. I wanted to provide people with a space to think about and discuss issues relating to eating disorders and body image. So I decided to make a film. I also decided that I would talk about my own experiences in this film. It seemed strange to ask others to speak out whilst remaining anonymous myself.

I am humbled by both the honesty and bravery of those involved in this film but also by the responses I have received. I do hope that the film is helpful to those who are suffering and is informative for others.

I am not recovered yet. I am still a feminist with an eating disorder. However, I hope one day my body image will align with my politics.

“It was the end of a relationship that was the trigger.” – DENISE

Kate: I put on that little bit of weight that you put on in puberty, I think, a little bit of puppy fat type, and I, um… it freaked me out.

Emily: I collapsed against the door. After about an hour I couldn’t get back up.

Amy: She basically told me that my eating was disordered and that’s not something that I’d thought of before.

Gillian: Ever since I can remember, food’s always been, like, an issue.

May: It wasn’t until I got to university that the kind of eating disorder really kicked in.

Ibrahim: 15, it all happened really suddenly.

“In 2008 I was hospitalised. I would like to say that was the end but I have relapsed twice since then.” – DENISE

Emily: I was told that I had bulimia and I did this through laxative abuse.

Jade: I would get very nervous eating out in public. I would eat by myself.

Ailsa: Just was purely restrictive on what I was eating.

Ibrahim: When I was going out with my friends I wasn’t enjoying it.

May: Socially, I was really struggling with my relationships because all I would talk was food.

Gillian: Um, it was a binge eating disorder.

Emily: Obviously with the bulimia you don’t end up losing a lot of weight, even though you want to. I was, sort of, binge eating about 10 bags of crisps or a load of Kipling cakes, chocolate, sweets, everything I could get hold of, and then I’d try and not eat anything for a few days and sort of go in a cycle.

May: So it was very difficult living with people at university.

Amy: Just very, very unhappy with how I looked, and stopped going out and socialising with friends.

Jade: Not including myself in any social situations.

Gillian: I would eat to the point where… where I was full, and then keep going.

Emily: Now it’s turned out that for the rest of my life, I’m going to have to take very weak laxatives.

“I honestly didn’t care that I was destroying myself. But I couldn’t bear to watch my whole family being torn apart by it.” – HANNAH

Ailsa: I think it sort of comes from realising that you can’t have a life and an eating disorder. You have to choose.

Kate: I went to an eating disorders unit in Manchester as an out-patient.

Emily: Talked to the university health service and after that I got lots of support from the counsellors and the clinics that they run.

May: Really, really difficult, but it’s also, like, dappled with these sort of epiphanies and this learning about yourself.

Kate: I kind of just decided I was bored of it and I just went and ordered a takeaway, which isn’t what usually happens.

Gillian: I became quite involved with fat acceptance movements. It taught me that, you know, I shouldn’t be ashamed of being the way that I am.

Kate: I used to go and have a guitar lesson if I put on so much weight, and that was a good incentive for me to learn.

Jade: Talking about it, that’s the first step, I think.

“You might be surprised at just how understanding and caring some people can be.” – NADEEM

Amy: If you’re a student, there is Biteback, which is the eating disorders support group. You don’t have to have had a diagnosis to go, you can just go along and it’s a confidential space to share your thoughts and feelings.

Kate: If you can’t speak to, like, your family, just go to your local GP.

Ibrahim: I think you’ve got to surround yourself with positive people.

Ailsa: Focusing on the things that you have to care about, that have nothing to do with body image.

Gillian: If you’re a student here then there’s great eating disorder services in the Medical Centre. I’ve been with them, they’ve been really supportive.

Amy: Just… like, it’s been a lifesaver and the nurses there are really, really friendly.

Kate: Go and get help.

Emily: ‘Cos for six years, I never spoke to anyone about it.

Jade: Keeping a journal as well.

Ibrahim: You do… you do get a relapse now and then, but when you, kind of, beat it, you appreciate happiness so much more.

Kate: You can be fine, and I’m fine. Like, I eat normally now.

Jade: Yeah, it’s quite surprising what you can do.

Gillian: You know, you’re not alone.

Jade: And there’s probably a lot of people going through the same thing.

BODY IMAGE AND THE MEDIA

“Society has managed to glamorise something which is unhealthy, and quite frankly dangerous.” – HANNAH

Ailsa: Ah, I hate it. I hate everything about it.

Kate: Just another way to control women, and I think men are getting a bit of it now, but I still don’t think it’s quite as severe.

May: It was a maintenance factor for me. I really sought out material like that and compared myself throughout my eating disorder, and I made a very, very conscious decision to avoid all of that material when I was getting better.

Kate: I wanted that look, and that is purely from seeing it every day.

Ailsa: And then of course there was just the fact that it’s incredibly unrealistic.

Amy: You end up aspiring to be something that you cannot be, and that’s really, really harmful.

WHAT DOES POSITIVE BODY IMAGE MEAN TO YOU?

“Being happy with how you look.” – NADEEM

Ailsa: It definitely doesn’t take a shape or form.

Kate: Like, I enjoy doing my degree and that’s part of my positive self-image. It’s not just about what I look like any more.

May: It’s about the things I do, and valuing myself, and believing in myself.

Amy: Seeing yourself as more than just your body.

If you are struggling with an eating disorder, or concerned about somebody else, contact b-eat for help and support

[The image is a photograph of a selection of women’s magazines. They each have stories on their front page about female celebrities’ bodies and diets, with headlines like, “New Year Body Battles”, “I’ve stopped hating my body at last” and “How I’ve lost four stone”. It was taken by Jaime London Boy and is used under a Creative Commons Licence]