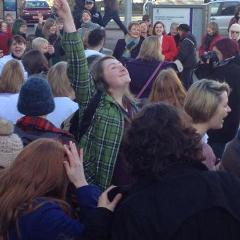 How feminism found me

This is a guest post by Laura M, a history and sociology graduate working as a support worker in Edinburgh. She has just started running a Facebook fundraising group called Save Edinburgh Rape Crisis Centre to help support EWRASAC, who are quite simply brilliant! She loves dancing, cycling and having a good brew.

Recently I was approached with the question ‘How and why did you become a feminist?’.

I have to be honest throughout most of my life I thought that feminism had died a death since its second wave and that (at least in the UK) men and women were seen and treated as equals. I thought there was no need to wave placards and get angry any more as we were in a really good position as opposed to others around the world. This is why I wasn’t a feminist. Oh how wrong was I!

The veil of ignorance was lifted after a personal traumatic event that shook me to the core and turned my world view on its head. Fatefully the feminist course at university, which I had chosen purely because it was 100% coursework based, (me and exams = not friends), turned out to be the course that provided the most support to me when I needed it. The research of my main essay about using the body as a site of resistance provided important knowledge and perspective on self-harm, which later empowered me.

This is how feminism found me.

The last two and a half years have been horrible, I’m not going to lie, but I am thankful for its enlightenment and that my direction in life has completely changed. Feminism found and cradled me at my most vulnerable.

Thanks to feminism I’m no longer the recluse too afraid to go to the shops. This Valentines Day was the first time I felt ready to protest with the rest of the world against gender violence at the One Billion Rising event in Edinburgh. Now feminism drives me out of the house into the world, empowered and dancing in solidarity.

This is why I am a feminist.

The photo shows a smiling woman in a green checked coat standing in a crowd of people raising her arm in the air. It was taken at Edinburgh One Billion Rising.