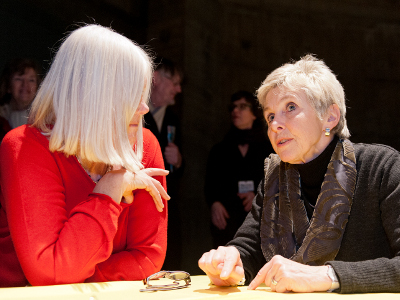 No interaction at Silver Action

There is a short queue to enter Tank number two at the Tate Modern, the vast space where Suzanne Lacy’s new participatory artwork is being hosted. I take this as a good sign; the one in, one out policy suggests that, though interactive, the work will still be lightly controlled, with audience numbers kept manageable to allow maximum participation.

When I enter the room, I see that the lefthand side of the tank space is taken up by numerous small square tables, around which are sat groups of silver-haired women. Four hundred activists aged sixty and over have been invited here today to take part (though not all are seated at once). Occasionally some will be beckoned away or new ones introduced to a table; the arrangement is fluid.

If I glance upwards I can read the words, as they’re spoken, of a woman who proudly asserts that “feminist” has always been a positive word in her vocabulary

This project is all about the contribution of older feminists in the past few decades, so the younger women scattered about typing furiously on tablets blend into the background, dressed in a loose uniform of black clothes. The reason for the typing becomes clear: select individual conversations from the tables are being projected up onto the walls. If I glance upwards I can read about a woman who helped unionise the secretaries at her workplace, or read the words, as they’re spoken, of a woman who proudly asserts that “feminist” has always been a positive word in her vocabulary.

The middle of the room is taken up by members of the public. I wonder why they are hanging back, afraid to wander into the matrix of tables and listen more closely. To my disappointment, I soon discover why. Although this piece has been labelled as participatory, it is not the public who are invited to participate. As soon as anybody gets too close to the tables, they are gruffly asked to step back out of the light. 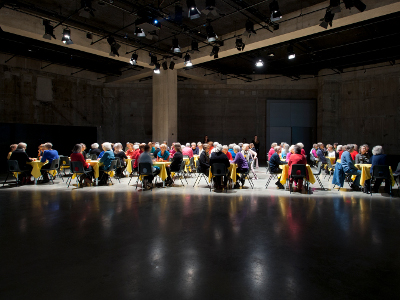 Lacy’s concept is a confused one. She has too many ambitions and has not decided where to focus. Is this work about transcribing? Is the ultimate aim to record the histories of these ageing feminists? Or is this about creating a forum for similarly aged women to come together and discuss where they have journeyed with feminism and where feminism is leading them today? Any of these would be worthy, but the advertising of the work is misleading. The widely understood definition of “participatory” regards audience involvement but the public here today are grumbling: they cannot get close enough to individual conversations to hear what is going on. They may as well read about this later, as there seems to be little additional benefit to attending in person.

There is one more notable absence. At the time I attend (when admittedly not all 400 women are present, but a large proportion are) I see only a single woman who isn’t white. Although feminism is often too white and too middle class, black and other ethnic minority feminists have had a lot of influence on the movement, both to mainstream philosophies and activities and to alternative ones. Groups for black feminists were certainly around and well attended in the 1970s, so why have none of their representatives been encouraged along today?

The project would have been infinitely improved had members of the public been encouraged and enabled to move among the older feminists, to listen more closely to their conversations, perhaps even to converse with these role models

The one older black feminist present is sitting at what I consider to be the table of honour. It is isolated from the others on the righthand side of the room. The participants at this table are being filmed. The lights are brighter, the transcribing more focused. Has the single black participant been sat here to give the impression that the group is more mixed than it is truly is?

Overall I come away thinking that the project is interesting and worthy. It would, however, have been infinitely improved had members of the public been encouraged and enabled to move among the older feminists, to listen more closely to their conversations, perhaps even to converse with these role models. As it stood, the event did not inspire too many members of the public who had made their way especially to the Tate Modern. Though it was undoubtedly stimulating for the older feminists and lucky young transcribers, I came away disappointed. Suzanne Lacy should take note and more carefully define the parameters of her future work.

Silver Action was a one day event; if you would like to know more, click here for information from Tate.

Shoshana is a young feminist who, having benefited immeasurably from the brave struggles of older feminists, is disappointed at how much there is yet to fight for and how few people recognise this