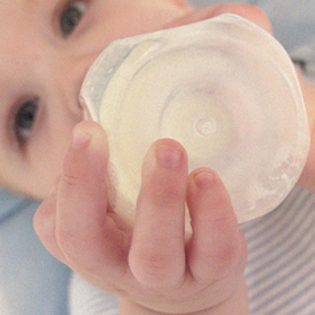 A guest post from Chrissy D about a recent open lecture at Kent University from Joan Wolf, the author of ‘Is Breast Best?’, on ‘total motherhood’ and the harmful myths swamping the discourse on parenting.

Dr Joan Wolf, in her lecture this week at the University of Kent, Canterbury, doesn’t really surprise me. She speaks rationally about society’s over-reliance on statistics and the findings of those who ‘know better’. “Breastfeeding is linked to other health-promoting behaviours”, she says, highlighting problems in statistics related to breastfeeding outcomes. Of course, I can’t see that anyone would deny this. However, as an advocate of the benefits to women and children of breastfeeding, I was surprised with how little I shook my head at what I heard.

But in questioning (not for the first time) whether breast is indeed best, she picks an odd – though certainly attention-grabbing – battle.

The lecture focuses on three sociological problems of the motherhood narrative in the US and UK: the over-reliance on breastfeeding research and potential misinformation about it, the cult of personal responsibility and holding mothers, rather than corporations or governments, to account with what she calls ‘total motherhood’.

In her introduction to the topic, Wolf attempts to ‘expose’ the issue of selection bias in research into outcomes for children who are breastfed vs those who are formula fed. She raises the issue of self-selection in such studies, of which there are over 9000 published to date, and the need for better triangulation and greater clarity about the conditions of such research.

But central to the talk are the problems -inarguably feminist problems- facing mothers today and the harmful myths swamping the discourse of motherhood.

Firstly, the hegemony of risk and responsibility; more specifically, the pressure on mothers to avoid risk at all costs, including those to the detriment of their own mental and physical wellbeing. The motherhood discourse is propped up with the superlatives of guilt: bad, worse and worst mother. With everyone just striving to stay in the former category. “If you formula feed, your baby will get asthma.” “If you bedshare, the child will be too attached and have a mental breakdown when they start school.” “If you carry your child as a baby, they’ll never learn to walk. This is particularly true of boys” (someone actually said that to me).

Wolf addresses this cult of personal responsibility with reference to the synonimity between health and responsibility, not dissimilar to the also media-made link between health and beauty. To be healthy, which in this case means to make culturally-agreed healthy choices for our children, is to be a responsible parent. To take risks, any risks regardless of the potential harm, is to show an incapacity to mother.

She also brings to the fore the now-ingrained use of the phrase ‘women of childbearing age’ in contributing to the obsession and vigilance that women are told they must have over their bodies. Womb-optimisation, including all the pre-conception reading, has the potential to become a full time job for cis women over 12 years in the developing world. This is a feminist issue; there’s no doubt in my mind that it is a step back in time and a hindrance to feminist progress in women’s liberation.

However, Wolf mostly skims over the greatest hypocrisy in the breast-is-best debate: that it is always mothers who feel the weight of blame for their choice to formula feed (and the potential poor outcomes we’re told about). Formula companies don’t seem to be held to account for their unethical marketing, both here and in developing countries (‘new markets’). There is also the promotion of six month plus milk intended to instil brand in the mother from the birth of the child and the rhetoric of formula advertising campaigns, to name but a few of the greatest offenders.

From my perspective, which I believe is a feminist one, the breastfeeding ‘crisis’ if we must insist on calling it that, is but symptomatic of much wider issues: the global food crisis and the health crisis. Another is that industrialisation has turned human beings (animals, after all) from producers into consumers and active decision-makers into passive victims of what we are told is the right thing to do.

Then, that same industrialisation -now familiar to us in the form of hyper-capitalism- is holding us personally responsible for the choices it advocates we make.

But Wolf has coined a neat and apt phrase: ‘total motherhood’ to describe the cultural-consensus that if risks are calculable, they must be preventable and that it’s a mother’s primary occupation to prevent them. Women must plan their lives around motherhood, potential or actual.

Although I think she perhaps picked the wrong battle, I appreciate Dr Wolf’s drive to expose the new high stakes of motherhood and the personal responsibility mothers now face for their children’s ‘outcomes’. The centrality of breastfeeding to her argument has raised the profile of her overall message and has brought the backlash against motherhood guilt into public discussion.

Chrissy D is the founder of www.attachmentfeminism.com

Image description: Downward view of a baby wearing blue and white stripes, holding and drinking from a bottle of milk. By nerissa, shared under a Creative Commons Licence.