Wildness comes to the Silver Platter

Wildness is a documentary about a bar in Los Angeles called the Silver Platter. Charmingly, the bar itself narrates the film, in Spanish.

Most of the week, the Silver Platter is a second home and refuge for the city’s Latina trans women. Tuesday nights used to be quiet at the Platter, until a crew of party organisers started a blow-out performance and club night called Wildness, which brought a new, bigger crowd to the bar for the first time. Those party organisers include the documentary’s director, Wu Tsang, and the DJs NGUZUNGUZU and Total Freedom, who put together the music for the film.

At its heart, the documentary is a ballad to and a record of a place and time of overwhelming importance to a small community. But the film is called Wildness, not the Silver Platter. Its subject is also what happens when the Platter welcomes in the filmmakers and opens its doors to the wider world.

Like all compelling art, Wildness takes a hackneyed concept and explores it with new eyes until it means something again

Through interviews and clips filmed in the bar, we are introduced to its regulars, for whom the Platter is a place of safety but also a regular fun time. They are mostly Latina trans women, often immigrants, and from multiple generations. Some are living precariously. One of them gets deported during the film. Another is killed.

Wu also appears in and is a subject of the film, worrying with the other Wildness organisers about whether they are disturbing the equilibrium of the Silver Platter. Are they introducing a kind of gentrification? Will the bar’s regulars feel estranged from their own space?

But in fact Wu becomes a part of the Silver Platter’s community and because of this he is able to carry out sensitive interviews with the Platter’s patrons about such painful experiences as being rejected by their families and fear of deportation.

Like all compelling art, Wildness takes a hackneyed concept – the location is a character! – and explores it with new eyes and a new depth until it means something again.

Making the bar the narrator keeps the film together, just like the actual Silver Platter shelters the communities who come and go. Wu made the perfect choice to help us understand how the bar is more than a mere building, a store front that could be occupied by one business or another, hosting visitors from one scene or another, even if the building, with grey boarding on the windows, is somewhat unprepossessing from the outside.

The narration also reminds the viewers that the degree to which the story of Wildness has been fictionalised is never completely clear. Obviously, as the lines have been written for the Platter by Wu and co-writer Roya Rastegar, a question mark is drawn over the objectivity of the film.

I saw the documentary’s UK premiere when the film was screened at the Tate Modern as part of a mini-festival Charming for the Revolution: A Congress for Gender Talents and Wildness. Unfortunately, I only managed to catch Wildness; our film editor Ania attended more of the conference and you can read her review here.

In the congress’s brochure, Wu talks about some of his experiences in making the documentary. He went into the project with the intention of making a film about a “safe space”. This is likely familiar terminology for F-Word readers and the Silver Platter, lovingly given voice by a transgender actor from Guatamala, Mariana Marroquin, surely seems like one.

But Wu explains: “I once asked Gonzalo Ramirez, the 72-year-old owner of the Silver Platter, if he thought of the bar as such [a safe space]. His response was very matter of fact. ‘Yes, we have security guards every day.’ I struggled to communicate what I meant by ‘safe’.” 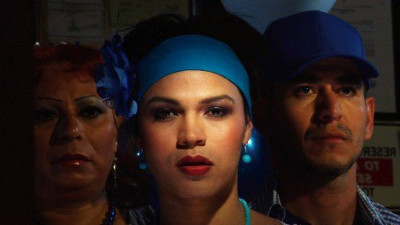 In fact, interviews with the Ramirez family reveal that although the Platter has for years been a gay bar, it hasn’t always been a haven for its current community. Even in the present day, the safety of the space is interrupted when journalists come to the Platter to experience Wildness, which in one case resulted in an offensive write-up by LA Weekly’s Sam Slovick. We see Wu saying, “Fuck Sam Slovick” (no, this is definitely not a documentary where the filmmakers pretend an anthropologist-like distance from their subject) and then, in a surprising turn, the filmmakers confront the journalist.

So the concept of “safe space” is complicated and that’s also what this film seems to be about: who is it safe for, where does this status come from and how does it stay ‘safe’? Is there even such a thing as safe space for certain groups anyway? Wildness doesn’t mean to answer these questions but after watching the film it’s hard not to feel that the answer to the last question at least is a cautious “yes”.

Wildness is a story that needed to be told. Go and see this film if you get the chance

At one point, Wu is involved in setting up a free legal clinic for trans people in a former shop, next to the Platter. While this is a practical idea, in fact the story that shines through the film is that the bar itself was already providing a community service.

The documentary was released in the US last year and scooped the grand jury award for outstanding documentary at Outfest 2012. This is no surprise whatsoever: Wildness is definitely not one of those worthy films that have crucial subject matter but are poorly made. Wu effortlessly tells a compelling story without simplifying the lives of the people he documents or imposing a single narrative strand. A great deal of thought seems to have gone into the politics of making this film, in particular of not pretending a false objectivity about a scene that the filmmakers themselves are a part of, at times intimately, as Wu gets involved in a dispute over who will inherit the Platter.

Not every film could so successfully catch the viewer up in the dramas of the bar and the lives of a wide cast of characters and then sweep them along in the spirit of the party, generously helped by an excellent soundtrack, all the while incorporating the broader context, that of legislation targeting undocumented immigrants and violence towards trans people, without any jarring.

Wildness is a story that needed to be told. And Wu tells it in such an entertaining and heartening way. Go and see this film if you get the chance.

Watching films at The Tanks…

A final word about the venue: the film screened in the Tate Modern’s new concrete addition, The Tanks. After only a few months, the space has already started to lay down a track record which is more radical than the main gallery. It is much more exciting for feminist artists and audiences and we have already reviewed two events that took place there.

That a few hundred visitors got a chance to see Wildness is fabulous and the space was entirely packed out.

However, this is an art space, not a cinema. The floor is entirely flat and we sat on regular chairs. Being in the back row, I couldn’t see the bottom of the screen, including the subtitles. Many in the audience abandoned their chairs to sit from the floor or watched the film propped against the walls. Trapped in the middle of a row, behind some tall people, I improvised a booster cushion with my bag and coat.

I advise caution before going to screenings at The Tanks.