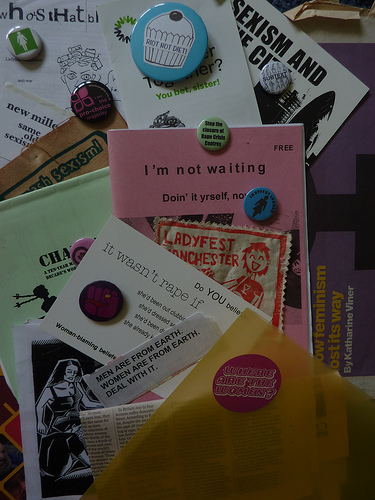 This is a guest post by Ellie Kilburn. Asked to describe herself, Ellie says: “I’m 17 and currently ignoring the fact that I have to revision for the History, Latin and Literature A levels I’m currently taking at my local sixth form. When I’m not doing that, I spend my time chasing people about deadlines for the school magazine I help run, The Beaver.”

Feminism is vital for teenage girls. It’s empowerment; it’s a movement that tells us that we don’t have to be forced into accepting our lot. Hallways are filled with girls who aren’t comfortable in themselves. 1 in 5 of which will experience sexual violence once they leave school, where ‘sluts’ among them are shamed.

Many teenagers regard ‘feminism’ as a dirty word and an alien concept. It’s all about being angry and castrating males with your luscious armpit hair. Few realise that feminism isn’t a concept far removed to behind the dusty walls of academia, but one which touches their everyday lives.

All of my friends have been shouted at from scaffolding or gesticulated at from car windows, or have their appearances rated out of ten as they walk into school. Maybe it’s because, suddenly, we have boobs, which apparently look very appealing under a school blazer to a passing driver. Or is it just that, as my friend said, “that’s just the way it is”? That, as young women, this is something which we must just accept? We are to get used to being worth no more than a wolf-whistle of ‘appreciation’?

Walk into a girls’ school toilet and hear the never-ending list of all the things that stop us from being perfect. Conversation turns to what plastic surgery people would have. Stomachs reduced, noses broken and knocked back into shape. You’ll never be the girls in the magazine. From that moment you notice that your thighs undulate softly as you walk, or that your stomach falls over the edge of your jeans, you’ll try to reach that Holy Grail of impossible perfection. We are plagued by the red circles from magazines we devour, afraid that everyone is circling imperfect parts of us.

On the back of the toilet doors are the latest bitch and slut. The absolute necessity of shaming the sluts seems to be instinctive from the time that the girl in another form gets her second kiss. Dirty whore. It’s very important that the slut is beaten down for her crimes, for daring to go out and ‘get some’ at a party because she wants to. If girls are taught at age 15 to shame each other for that, what chance do we stand in later life? The idea of it being perfectly fine for a girl to go out and kiss boys and enjoy herself, for women to go out and have sex and enjoy themselves, is one which is never entertained.

This issue doesn’t come up in one of the many lessons which informed me of all the dire consequences of sex. We’re volunteering – willingly, and quite often gleefully – to impose more restrictions on fellow women. Everyone knows the ‘lad/slut’ argument, a constant echo around my school corridors: a guy beds multiple girls and he’s heralded as the new king, a lad, while the girls whom he has slept with are sluts, the ones in the wrong. Yet not one of us thought to challenge this, to ask why. Teenagers need to know there is no difference between their behaviour and that of their male counterparts.

These issues will follow us into adulthood. I’ll always remember the first time a car slowed at the curb beside me as I walked home, in my school uniform, how the guy jeered at me, while pretending to wank out the window. There is nothing more belittling. You’re left feeling dirty and used, aged 14. And that happens every day. CKS (Clinical Knowledge Summaries, provided by NHS evidence) findings show that the highest rates of anorexia are seen in female teenagers aged between 13 and 19. These are real issues.

How can you tell girls that they stand the same chance as boys, when that girl can be so easily, and often, reduced to an object by men? When she can’t see any semblance of herself in the thousands of media images she sees every day? She must not fit quite right, so she should change. And she’ll be going out to work in an economy with, as the BBC reported in November, a 20.4% pay gap in the private sector and 14.9% in the public sector.

We’re not taught about these things, we don’t know they are real problems. So how are we meant to be ready to oppose them? It makes no sense to me to leave young women and men uneducated about the issues which surround gender equality. How can we be expected to change the big things, if girls aren’t educated about how to cope with the things which belittle them on a day to day basis?

Education combats ignorance. Teenagers are going to be thrust out into the world having been sold the idea they are already seen as equal, that feminism is dead. This is why I feel Generation F’s new press release statement that schools are “the new frontier of feminism” is unequivocally correct.

Image shows a range of feminist flyer and buttons, including some reading “RIOT NOT DIET!” “Stop the closure of rape crisis centres”, “Do YOU believe it wasn’t rape if…” and “MEN ARE FROM EARTH. WOMEN ARE FROM EARTH. DEAL WITH IT.” Shared under a Creative Commons licence by the F Word’s very own cathredfern.