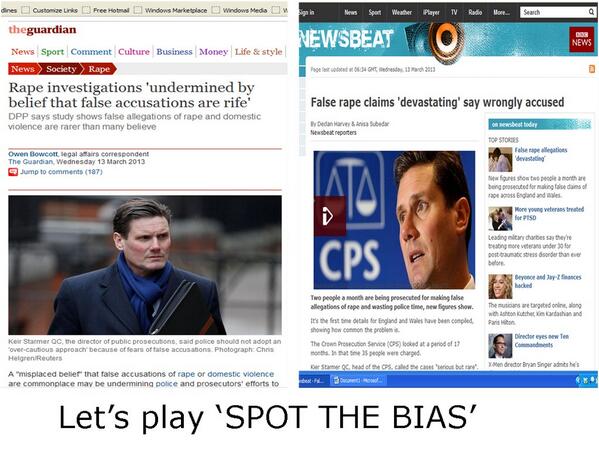 Two people a month are killed by animals in the UK. Which is a horrible thing to happen – but it’s rare. Similarly, two people in the UK are falsely accused of rape each month. Another appalling crime but again, it has to be said, rare.

Which makes me question why the two writers of a @bbcnewsbeat piece, Declan Harvey and Anisa Subedar splashed with ‘False Rape Claims ‘Devastating’ Say Wrongly Accused‘. They were writing up the news of CPS head Keir Starmer’s speech which has outlined fresh guidance for police dealing with rape victims. Here’s an excerpt from their article: ‘New figures show two people a month are being prosecuted for making false claims of rape across England and Wales….’

Mr Starmer QC, the Director of Public Prosecutions has directed police and the CPS to be more robust when seeking rape convictions. To make his point, he emphasized that of the thousands of rape allegations reported each month, just three in ten thousand are false, or 0.03%. In other words, he’s saying – women aren’t being believed, men are getting away with rape and the police have to do better.

BBC Newsbeat is the news outlet for Radio 1. And as the station trying to recover its image after the Jimmy Savile scandal, it is the one BBC news outlet that needs to get this right for their young audience. In this article, their BBC is telling them: ‘Rape doesn’t often happen’ ‘Girls just make it up’ ‘How awful for these poor, innocent men’.

By raising the issue of false allegations, @NewsDeclan and @OnlyAnisa have taken the finger of blame and forced it painfully the other way. Newsbeat has picked this story up by its throat, turned it inside out so its guts are showing then staked a flag in it saying: ‘But what about the poor men?’.

Noone is forgetting the humanity of men and I really don’t think we need reminding of it when reporting on sex crime policy. The problem is that SOME men and, can I stress, a VERY small percentage of them are ignoring the humanity of a woman and her right to have sex on her terms and her terms only.

False allegation is rare enough to be classified as a rape myth: ‘She’s lying’ or, ‘She’s making it up to get back at me’. According to the recent police inquiry on Savile, six or seven victims approached police during the TV star’s years of serial abuse. They were, on an individual basis, sent away by the copper at the station front desk with: ‘I don’t believe you. Get out’.

The problem with crying: ‘Help! False Rape’ has been exacerbated by its incredible success as a rape defence in court cases. This reminds me of a scene in the film ‘A Few Good Men‘. Demi Moore, wanting to lure Marine Chief Jack Nicholson into admitting having ordered abuse, pleads with barrister Tom Cruise: ‘But you KNOW he’s lying!’. To which legal-savant Cruise replies: ‘Great! I was afraid we couldn’t use the ‘Liar, liar, pants on fire’ defence!’.

But what a marvelous defence ‘Liar, liar’ turns out to be. In the Frances Andrade rape case, of recent months, the ‘Pants on fire’ rape defence was chillingly played out as we watched. Successfully.

Mrs Andrade was sexually abused as a child by one of her teachers and his wife when she was a pupil at Chetham’s music school. The abusers, Michael Brewer and former wife Kay had barrister Kate Blackwell QC heckle Mrs Andrade for two days and accuse her of, ‘indulging in the realms of fantasy’.

But then you have to ask: what IS the motivation for the woman who goes to police to make a false allegation of rape. Is it the thought of being humiliated by a private genital examination after being physically overpowered?

Is it the hope that you’ll get to sit in a small room with no windows for hours on end answering the questions of strangers wearing uniforms when you’re reeling with shock and pain? The wish to live a few months, or years, with the prospect of having to stand up and face – not just your attacker or his barrister – but a full courtroom? Is it the pure joy evoked when the judge and every member of the jury says: ‘I don’t believe you. Get out’ while the people from the newspapers scribble down notes.

‘Liar, Liar’ is the best defence most alleged rapists can conjure up. It hooks rape case juries – but not juries sitting on cases of burglary or common assault. Because of you, Declan Harvey and Anisa Subedar. Because of the BBC and Newsbeat. Who was the programme editor today by the way – the canteen manager? Take firm hold of that finger – and point it the other way.

[The image is two screenshots next to each other. The one on the left is from the Guardian website and shows a headline which reads, “Rape investigations “undermined by belief that false accusations are rife”. The one on the right is from BBC Newsbeat and reads, “False rape claims ‘devastating’ say wrongly accused”. Underneath the screenshots is text which reads, “Let’s play spot the bias”. The image was created by @fuz_wuz and is used with permission]