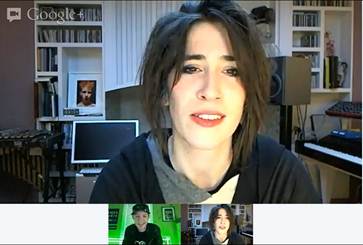 ‘Telemiscommunications’, a collaborative project created by Imogen Heap and deadmaus5, was unveiled earlier this week on Google+ hangout. A haunting, textured tale of loneliness, frustration and the urge to connect, the video to the piece was created in a similarly collaborative fashion. 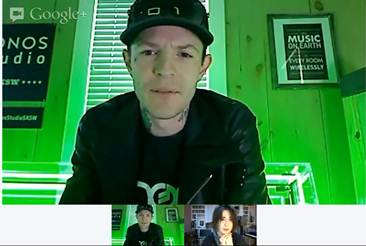 As the press release explains:

“20 individuals were selected with each animator taking ownership over their own segment, working in their own style and medium. These were then edited together to produce a remarkable video.”

You can watch the Google+ hangout, in which Heap and deadmaus5 discuss the project, here.

Olivia Sebastianelli is a 19 year old “storyteller” from London. Suspicious of the Brit School route of doing things, Sebastianelli reportedly “left a major record company recently after they tried to get her to record her every waking move with a camera. She doesn’t do video diaries.”

The brooding menace of ‘Rose of stone’ is given another dimension of terror when you take into account that it’s video was filmed in the chapel at the school the teenage Olivia was bullied at.

Similarly London based is the hard working Laura Kidd, who has been zipping about the country on tour this month, and has released a remix of her new single ‘Never Was’, a dreamy slacker piece that you can hear here.

Laura describes the remix as “a collaboration with musical friend and sometime member of my Olympians supergroup Cajita, whose solo album “Tiny Ghosts” is due out later this year. ‘Never Was’ is a song about seeing greatness where there is none, separating romantic fact from fiction and generally hoping for better from people. The original version appears on my 2012 album Little Battles.”

And to finish, this is Bluebell and ‘Normal Heights’. A double A side with the oh-so-sardonically-catchy ‘Cinderella’, ‘Normal Heights’ is muscular electro pop for the modern age. Like Olivia Sebastianelli, Bluebell have featured in The Guardian‘s New Band of the day series, and you can read their entry here.

Images are of Imogen Heap and deadmaus5 sitting in front of computer screens, and are stills from webcams

First video: Imogen Heap and deadmaus5, Telemiscommunications. Using a variety of different animation techniques from cgi to plastecine, to various computer, hand drawn and hybrid techniques, the story unfolds a tale of lonely folk in airport transit zones, in busy work places, in the street, trying and failing to communicate with loved ones.

Second video Olivia Sebastianelli, Rose of stone. Olivia is shown sitting in a car, standing at an alter in a chapel, wearing a furry hooded coat, wearing black clothes, wearing a dress and full makeup. A tap drips into a cup of coffee, smoke fills the air, and as the video progresses hands can be seen trying to get into the chapel. The overall atmosphere is of eerie foreboding and underlying gothic menace.

Third video Bluebell, Normal Heights. This video is sound only.