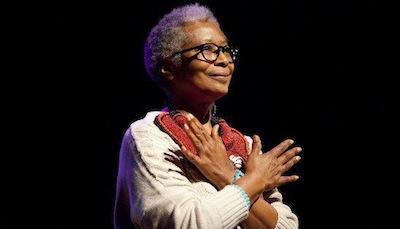 On Sunday 10 March 2013 Women of the World Festival held the exclusive world premiere of Alice Walker: Beauty In Truth, a feature-length documentary by Pratibha Parmar about the life and art of the Pulitzer Prize-winning author of The Color Purple.

Pratibha is a founder of Kali Films, a film and television production company engaged in the creation of films that are “entertaining, thought provoking, intelligent and aesthetically stunning”. Her previous films include A Place of Rage, a documentary film on African-American women and the civil rights movement featuring Angela Davis and June Jordan, and an extremely challenging Warrior Marks (1993), which documented female genital mutilation at a time when the subject was taboo globally. Alice walker collaborated with Pratibha on this award-winning documentary.

The screening of Beauty in Truth took place in the Queen Elizabeth Hall at the Southbank Centre and was followed by Mariella Frostrup in conversation with Alice Walker and Pratibha Parmar.

Our new contributor Huma Munshi shares her thoughts about both the film and the Q&A. Reminding us how crucial intersectionality is for feminism, Huma writes: