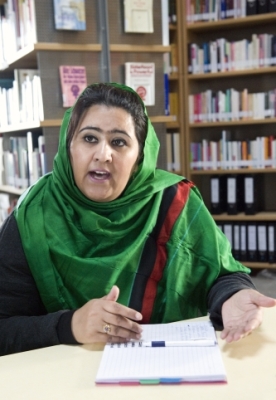 Women’s participation, contribution and social presence: withdrawal at what cost?

Samira Hamidi, an Afghan woman activist, shares her perspective on what has changed for women in Afghanistan since 2002 and the challenges they face in the coming years following the withdrawal of international troops.

This is considered a critical period for the life of every citizen, and particularly the women, of Afghanistan. The entire focus on aid, sustainability and a peaceful Afghanistan has shifted to a single discussion: the withdrawal from Afghanistan by 2014, and Afghan-led security control. However, ‘withdrawal at what cost?’ remains a bigger question for the majority of Afghans, including myself.

When I look at the situation and analyse it on a daily basis I see two completely different conditions. On the one hand, women’s rights activists are playing a significant role. We are optimistic for a better future, improvement in the lives of women at the local and district level, and continued international solidarity and support. On the other hand, there is a lack of clarity that makes us pessimistic. We lack clarity around the Afghan government’s agenda, commitment and political will, the rush of the international community for 2014 withdrawal, insecurity and increased violence against women.

I always get the bigger question, which is ‘what will be the impact of withdrawal on Afghan women?’ There are still a number of challenges not addressed fully that can contribute to social, economic, cultural and political change in the lives of women in Afghanistan.

I think where girl’s education has been an opportunity, the growing insecurity, lack of enough girls’ schools, conservativeness of people towards girls’ education and social life has always remained a problem. Girls are still attacked by acid throwing and poisoning. This has drastically increased in the years 2011 and 2012 throughout the country.

I think women’s political participation is considered one of the biggest successes for women in Afghanistan. However, women’s participation alone cannot answer the broader issues around the roles that women political leaders should play and the responsibilities they should take on. This is an unresolved issue. Women still do not enjoy a secure and harassment-free environment to contribute the way they want to. The presence of warlords and powerful actors within government institutions has remained the bigger challenge for women’s contribution.

Afghanistan does have plans, laws and institutions that focus on gender equality, but implementation and capacity has always remained a challenge. The Ministry of Women’s Affairs always faces the serious challenges of monitoring the implementation of the National Action Plan for the Women of Afghanistan (NAPWA), lack of political will and capacity within government institutions.

I believe that whilst there is a well-established, informed and strong women’s movement in some of the major cities in Afghanistan, they work in an entirely risky and challenging environment due to a lack of protection. If a woman activist is at risk in Afghanistan, she has nowhere to go and seek refuge.

I want to recall some of the old recommendations that the Afghan Women’s Network made, which are so relevant to the situation of women at the moment. I want readers to take this as the voice for Afghan women and join us in the advocacy we will be carrying on for many more years:

“Making security transition successful can be only measured if women are part of it. Women’s collaboration, social life and daily participation should be an indicator of the success of this process.”

Afghan women have come a long way since 2002. It is important that they receive continuous support for the cause they are fighting for. This is only possible when there is unity to tell the Afghan government that women are no longer the victims, and that they are not alone. Withdrawal should not affect the lives, achievements and future contribution of women. In the whole shift after 2014, women’s rights and empowerment should still remain the priority for the international community. For me, the vision for Afghan women is clear; we have a long way to go and we will still struggle for many years.

My approach as an Afghan woman activist has been optimistic. I have tried to come up with solutions that could most directly impact the lives of women. My optimism is important as this will pass on a strong message to the world. A message that says: ‘In spite of the ongoing challenges, concerns and drawbacks, Afghan women are not the illiterate women under the burka of 2002’.

“If a woman victim of violence like Aesha coming from a very remote and conservative part of the country can run from home to save her life after her nose and ear is being cut, if she can fight to recover and if today she can call upon other women victims to stand up against the violence and injustice, we all can carry on this fight.”

NB: The first two links in the text were not working a the time of publishing as the site seems to be down, but I’ve included them anyway in case it comes back up soon – Laura.

The photo shows Samira sitting in what appears to be a library. There is a notebook on the table in front of her and she is explaining something to someone off camera.