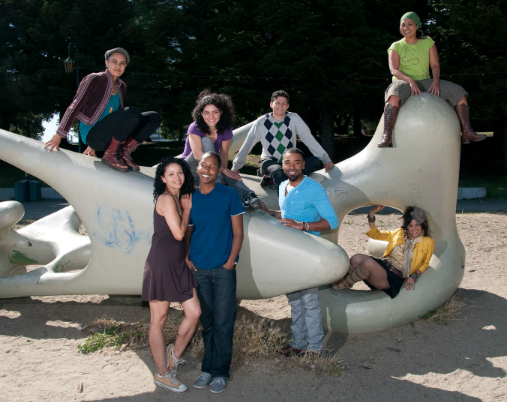 Television is a really hard game to break into. Maybe that’s one of the reasons that so much of what’s on TV is so… samey.

Dyke Central, a TV show about two flatmates in Oakland, California, aims to change that:

Dyke Central is an Oakland-based dramedy that centers around 30-something butch roommates Alex and Gin. The first season sees Alex attempting to sustain her dysfunctional relationship with girlfriend Jackie, in the face of new life options and the resurfacing of an old flame. Gin, on the other hand, is a chameleon whose identity changes with every new interest and tends to lose herself in others. Surrounded by a diverse group of friends who guide, challenge and support them, Alex and Gin struggle to adapt to change and create balance in their lives without losing themselves.

You can already watch the pilot episode on YouTube, here:

But right now director Florencia Manóvil* is in the middle of crowdfunding enough to film as much of season one as she can. The scripts for 11 episodes are ready to go, but the money isn’t there yet to film them. ‘We’re ready, we have talented cast and crew ready to go, all we need are the funds to do it,’ she explains here:

(No transcript available for now, but I will update the post with one if I can.)

Here’s the link to Dyke Central’s Indiegogo page, where you can go and find out more and donate if you want to help make this project happen.

*Transparency alert: I’m friends with Florencia. But I wouldn’t steer you towards her project if I didn’t think she was doing excellent work, that’s worth you supporting and watching.