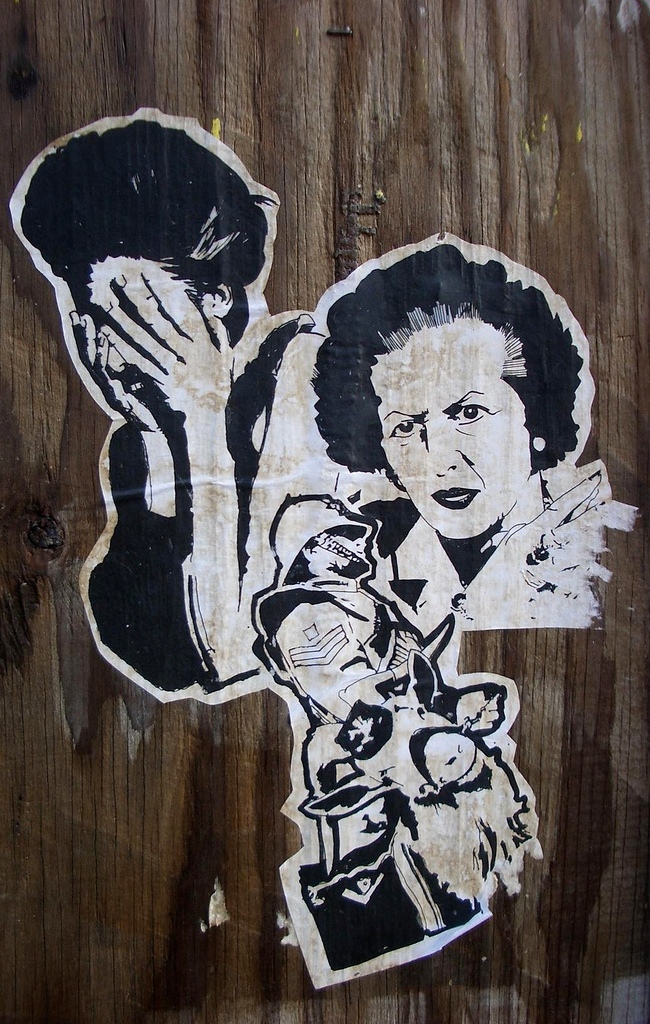 Not because she was a woman or despite it: more views on Thatcher

Like a few others, I didn’t see much to celebrate about Margaret Thatcher’s death when I heard the news on Monday. I know enough about the damage the Conservatives did under Thatcher (see Laura’s post from Tuesday for some examples of Thatcher’s actions) to appreciate the strength of feeling behind the celebrations but my immediate reaction was not jubilant. After all, the death of this one person doesn’t undo the damage to lives that were wrecked or diminished by her politics when she was in power and, today, changes nothing for the people whose lives are currently being wrecked or diminished by her legacy now. As one Twitter user put it on Monday, “Although the person is dead the ideology very much still alive. Would be so much better the other way around.”

Along with this, the nightmarish state of affairs that Owen Jones said he was dreading, back in September, has been coming true: lots of fervent and over-the-top emoting about Thatcher as a figure, combined with a “relentless political broadcast for the Conservative Party”.

After a few days, all the glowing statements about Thatcher being a prominent and powerful woman deserving of our admiration (“however much we might disagree with her” etc) started to get inside my head. I found myself half-recalling tantalisingly contrary declarations of love for her in essays from self-professed feminists included in an exhibition on Thatcher I attended at the Women’s Library a few years ago. I was reminded that it’s disturbingly easy to be swept away by the cult of personality even when the personality in question is one of a number of people standing for an ideology you hate.

But the fact Thatcher was a formidable woman who broke through sexist barriers to achieve what she did and was eventually discarded and stripped of power by the party she once led does not, in my view, somehow obligate feminists to pay tribute and give credit. This is because with power comes responsibility towards those with less. This surely means a woman who fails her people should be criticised every bit as much as a man who does. She doesn’t get a free pass to rule without being held to account just because she’s a woman and we perhaps feel grateful for her success. (If you want to see a great call-out to claims that Thatcher was a feminist icon, check out this open letter from Hampshire Feminist Collective.)

Equally, women with power who fail others are not somehow “worse” or deserving of extra ire. Neither does it make them somehow “not women” (see Glenda Jackson’s description, in her otherwise brilliant recent speech, of Thatcher as “a woman- not on my terms”). Women also shouldn’t be sidelined just because one of us got it so very wrong; Morrissey has even suggested (albeit acknowledging just how wrong Thatcher was to say she owed nothing to feminism) there will never be another woman in power in British politics because of Thatcher’s damage.

Misogyny doesn’t fly either. No behaviour makes it okay for us to use a person’s membership of an oppressed group against her and if this is all it takes for us to issue bigoted insults that stigmatise whole groups of people, we were clearly bigots all along. As Melissa McEwan has said, there are many legitimate objections to Thatcher and yet the first line of offence has been straight at her womanhood. Emma Pooka of Angry Women of Liverpool also sums it up well when she says a good test is “to ask yourself if you’d ever find occasion to use the same insult on a man, without the insult centring on implying he’s like a woman”.

Following on from this, Grace Dent has rightly questioned why attributes commonly associated with powerful men have somehow made Thatcher a “witch”. However, she also says:

I think this demonstrates part of the problem.

Margaret Thatcher might have paved the way for there to be room for a scattering of token women but this has not changed anything for women’s overall position in society. So let’s not imply that the cause for women’s emancipation has been somehow furthered by her.

I took part in a couple of radio discussions about Margaret Thatcher over the last week, which you can still listen to until Tuesday. The first was a debate with Dominic Laurie (standing in for Shelagh Fogarty) and the Telegraph Women’s Editor, Emma Barnett on BBC Radio 5 Live (1.23.36 – 1.31.42). The second was with Paul Salt (standing in for Simon Hoban) on BBC Radio Merseyside (1.09.54 – 1.14.50).

What some other F-Word writers have been saying about Margaret Thatcher:

“Section 28 came in under Thatcher. When I started working in education, it was illegal for local authorities to “promote homosexuality as a pretended family relationship”. It was such an ambiguously worded, bigoted law that schools thought it applied to them and that they had to avoid (or could take it as explicit permission to avoid) education, representation or inclusion of LGBT people or issues. I’m still witnessing the repercussions.” – Chella Quint

“From all the Wizard of Oz references, I’m guessing I’m not the only one who feels that some kind of childhood bogeywoman has been definitively felled. If that’s the case, beyond the glee, is there some new living we can do without the fear?

She was real, and the effects of her ideology are — but the reactions I’m seeing also position her as a supranatural figure (specifically the Wicked Witch of the West), suggesting that she took on a folk culture role of generalised fear, as the Great Censor. And while we can organise against the effects of her ideology, maybe we also need to look at our own response to what we fear and how we give it *internalised* power over us.” – Sophie Mayer

[Picture by Bixentro, shared under a creative commons licence. This shows black and white graffiti on wood. The image has the appearance of a cut-around collage-style and includes a person with their head in their hands on the left, Margaret Thatcher on the right and soldier in a pith helmet with a billy goat at the bottom. This perhaps references the goat mascot and Goat Major of the Royal Regiment of Wales, possibly in reference to events in Wales towards the end of the miners’ strike.]