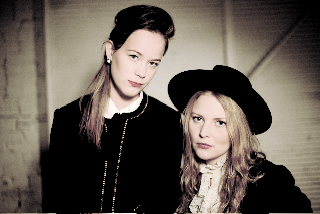 Music paste up: Mise en scene, Thao & The Get Down Stay Down, Emily Wells

Disclaimer: The first of these videos makes use of a flickering screen technique throughout

Canadian duo Mise en Scene are currently touring the UK, and to coincide the tour, they’re releasing a UK only E.P Hey Velvet on 29 April. You can see them at Focus Wales in Wrexham on 25 and 26 April and at the Windmill in Brixton on 27 April.

On 1 May they will play the Dublin Castle in Camden, followed by a short afternoon set at “Station Sessions” at St Pancras International the day after. They then spend two days at Liverpooll Sound City on May 3 and 4.

The band’s debut album Desire’s Despair will be released in autumn 2013.

Mise en scene are Stefanie Blondal Johnson (guitar/vocals) and Jodi Dunlop (drums), and they make a lot of noise for two people. “It’s all about climbing the ladder,” Johnson says, in a press release to promote the album and UK tour, and Dunlop echoes the ethos. “The way we perform and carry ourselves – it’s like we have something to prove,” the drummer says. “And we do. It seems like people are constantly doubting us, so we always have to exceed their expectations.”

Thao Nguyen is a musician with an impressive back story, having spent most of her twenties touring and working with artists such as Andrew Bird, Mirah, Laura Veirs and Tucker Martine, Thao now lives in San Francisco. 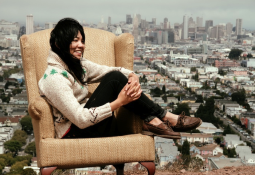 An advocate for California Coalition for Women Prisoners, the track above ‘We The Common (For Valerie Bolden)’ “was inspired by a poignant, candid and unshakable conversation with Valerie Bolden, a woman serving life without parole in the California state prison system.” according to Nguyen and the videos director Lauren Tabak.

In their press release to accompany the release, they add “At its core, this song is about people collecting their energy and taking care of one another, and all the joy and celebration inherent in such an act. Visually, we wanted to capture this joy and lighter moments of our every day human interactions while touring and sharing this new record.”

‘We the common’ is taken from the bands album of the same name, which is out now.

Multi instrumentalist Emily Wells recently appeared alongside the likes of Clint Mansell and Philip Glass on the soundtrack to Park Chan-Wook’s recent thriller Stoker, a musical moment that has introduced this intriguing artist to a new audience.

Wells is a trained classical violinist and her influences are drawn from far and wide, from classical to hip hop, hers is a sound both complex and compelling. New single ‘Passenger’, which is released on April 29, sounds like early Cat Power only more disorientated. Her album Mama will be released in June, and she will tour soon.

First image: Mise en scene, courtesy of Hermana PR. This is a head and shoulders shot of the two musicians, who are looking straight to camera and wearing a lot of black.

Second image: Thao Nguyen by Lauren Tabak. Thao appears to be sitting in an armchair, looking away from the camera. The armchair appears to be suspended in mid air over a back drop of skyscrapers.

First video: Mise en scene, Hey Velvet. A die spins, and in the forest a horse shines white as two cloaked figures move through trees and past streams. This is intercut with clips of the band performing live. Black screen. Next scene, it is morning in the forest. Stefanie and Jodi are shown walking towards a stream, carrying a jug. They are walking very carefully, as though they are creeping up on the river. Hooded and cloaked, they scoop up fire from the river and look at each other, the light glints off their gold eyeshadow. Clips of them carrying the jub of gold/fire through the forest are intercut with clips of the band performing live.

Second video: Thao & The Get Down Stay Down, We the common (for Valerie Bolden) The video is encapsulated in the press release Domino Records sent out to accompany it’s release: “Tabak and Nguyen recorded many of the carefree and upbeat moments that occur on the road. From the antics that take place between shows and the vibrant array of people they meet to the full force of the live experience that brings the audience together, it’s honest and full of charm.”

Third video: Emily Wells, Becomes the colour. The song plays over a poster for the film Stoker and lyrics to the song run over the poster. At the end, when there are no more lyrics, a series of stills from the film are used.