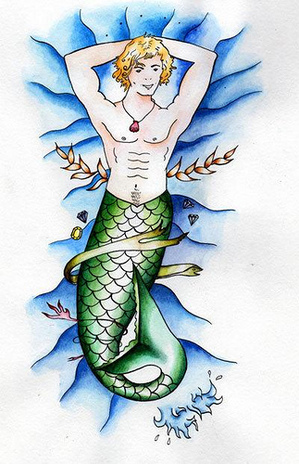 My son is six years old. Just before his fourth birthday we were looking at birthday cakes I could make him and he found a cake consisting of mermaids frolicking on a rock. He loved it. He really, really wanted this mermaid cake. In the description it stated “Perfect for your little girl.” He is, as is often found with individuals on the autistic spectrum, quite literal. He took this to mean he was not allowed the cake; that it was only for girls. The resulting discussion led to him writing this “story”.

I was proud (still am), and a printout of the page remains above my desk to this day. If a six year old can get it, why can’t multinational corporations? He was confused with the segregation in toy shops and bemused at the insistence of his peers that some things were for boys, some for girls. But this was before he started school.

Since then, I have seen the effect on him of attending school and experiencing more of wider society. His Asperger’s has affected the extent to which he cares what other people think, but it seems a constant battle to keep the bigoted views he’s experiencing outside of the home at bay. We’ve had talks about same-sex relationships after his comment “Errr, that’s two men kissing!” and we’ve discussed the idea that women in science and mathematics tend to have to work harder to be respected. The latter arose because we were watching Jurassic Park and he exclaimed “Oh, look, a lady scientist!” I am yet to go into detail with him about the issues with his adjectival marking in this case, but he gets the gist.

The point I’m trying to make is that, as a parent of a boy, I am doing my absolute best to help him grow into a man who respects everyone and holds views that he has thought through, but the impact of the outside world (school, books, other children, other adults…) is difficult (to put it lightly).

We recently attended a wedding and he asked me why I wasn’t married. I told him that some people choose to marry and some people don’t. He thought about this for a while and said “Does that mean you’ll have monsters, like Princess Smartypants?”

These influences are all around him and often are innocently offered. My Grandad has expressed that he doesn’t want my son to get bullied for being effeminate. This teasing has happened, and I was left with a difficult decision. When he told me he wanted shorter hair because the other children said he “looked like a girl,” I asked him to think about it. We talked about what was wrong with “looking like girl.” We talked about why the other children might see something wrong with it. But in the end, when he came to conclusion he wanted it to be cut, I allowed it. Am I reinforcing the views that I would prefer to banish? Or would not allowing his hair cut simply stifle the autonomy that I would like to encourage?

The decisions faced by parents of all children every day have very real impacts on everyone around them. Peer pressure begins pre-school and continues. If this isn’t given a check and discussed at some point (home, school, friend’s house…) then once that individual reaches adulthood, attempting to re-educate is challenging – we are fighting ideals that have been reinforced for a significant portion of their lives.

When an adult expresses misogynistic or generally bigoted views it can be difficult enough to challenge, based on the context. But it’s possible, adult to adult. When a child expresses these views, what should we do? When my own child echoes these opinions he’s heard elsewhere I can have an age-appropriate discussion with him, but what about when we hear another person’s child express these views and not be challenged? Who should we try to educate in this situation – the adult or the child? Or both?

[The image is a drawing of a mermaid with a physically male appearance. It was created by Tatyana Nyanko and is used under a Creative Commons Licence]