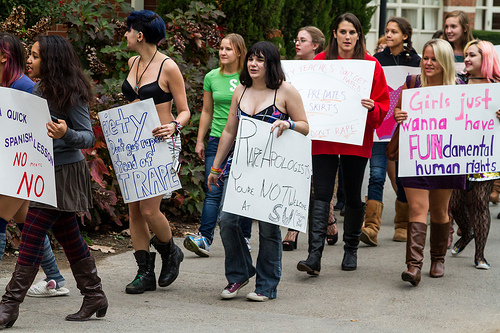 Who’s to blame: sexism in universities

University. It’s a time of freedom, a time when people are away from home, often for the first time and understandably they tend to go a little wild. Freshers’ week is by now an infamous rite of passage, an alcohol-fuelled blur that most students spend the rest of the year attempting to remember. My personal memories are just as hazy as my flatmates’, but one night in particular stands out.

After attempting to out-drink the boys in our flat (having been crowned an honorary ‘lad’, an accolade I bear with mingled pride and disdain), we met up with some other guys. Suffice it to say that one of them took a more than keen interest and didn’t seem to realise I wasn’t returning his attention. After a very long night, I was left to wonder as to whether I’d deserved this harassment.

After sobering up, I quickly came to realise that what had happened was not usual freshers’ week behaviour. Or at least I hoped it wasn’t. When I came to talk to my flatmates about it, I was told that if I hadn’t been flirting with him, or let him into our flat, he wouldn’t have got the wrong impression. It wasn’t just my flatmates either. It was also the person appointed by the university to ensure that we were all feeling safe and happy within our accommodation. The message I received from this incident was that if you’re a young woman and you talk to a man, you deserve everything you’ve got coming to you. Because talking means sex. Surely.

When I asked my flatmates to stop making sexist jokes, I was shot down, told by the guys and girls that it was just harmless ‘banter’ and I shouldn’t get so upset

I spent the rest of my freshers’ week and the following weeks feeling dirty and ashamed. I was constantly watching over my shoulder for the guy in question, terrified that he’d come and confront me for my double standards as I’d clearly led him on and then reported him and twisted the facts in some sick game.

I spent the following day unable to process not only what had happened, but also people’s reactions to it. Was it my fault? Should I have not spoken to him? Had I led him on?

As I got thinking about what happened, I tried to put it in the wider context of sexism at universities, an issue that the National Union of Students has, for the first time, placed at the centre of policy-making through their recently released report ‘That’s what she said’.

An example of the deeply ingrained sexist culture at universities is the now infamous website UniLad. UniLad was temporarily closed due to one of its members posting: “And if the girl you’ve taken for a drink… won’t spread for your head, think about this mathematical statistic: 85% of rape cases go unreported. That seems to be fairly good odds.” It was followed with: “UniLad does not condone rape without saying ‘surprise’.” When I read this out in a room with three guys in, one of them laughed and didn’t understand why it could be construed as offensive.

Sadly, this attitude is not confined to the internet. A standard, pre-drinking drinks session, or even sober discussion, will inevitably feature jokes about lads’ behaviour or rape.

The fact is that one in seven female students is a victim of sexual assault or violence while at university or college. 90% of these students do not report what happened to the police and are most likely not to tell friends or family. 50% of them don’t talk about it because they are too ashamed or embarrassed. If rape and violence jokes are becoming an acceptable form of humour, how are victims of sexual assault supposed to feel able to talk about it?

Some guys participate in this culture to be one of the lads. Then there are guys who make a point of showing that they don’t buy into lad culture. They come across as the ‘nice guys’, the ones who frown upon those who openly treat women as sexual objects. Yet some of them demonstrate the same sense of entitlement felt by the men they disdain. They feel that, as the good guys, they are better than their peers and deserve not only a woman but, essentially, a fairy-tale princess – a girl who is sweet, innocent, pure and utterly devoted to them. 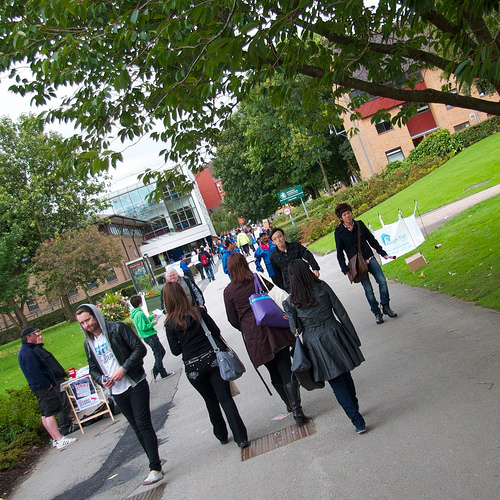 I recently got told by one such guy that my confident attitude “makes [him] think there’s a darker side to [me], hence why I’d say you’ve got a promiscuous edge”. He also told me that my tattoo on my lower back reinforced this, clearly using his magical man intuition, mantuition if you will, to determine my sexual habits from my confidence and choice in body art.

Then in a seemingly random turnaround, I was told that I’m too intelligent to be “any old slag” and should therefore “be treated better than such”. The implication, notwithstanding the insulting use of the word ‘slag’, being that women with active sexual lives are somehow unintelligent. Or that, as a woman, to want to sleep with multiple partners you must be stupid as you should be saving it for your prince.

Lad culture has become a daily part of university life. Anytime anyone makes a joke that could be construed as offensive or behaves in a way that can be deemed insulting, it’s dismissed as banter with the shout “What a lad!” If you shout loud enough, you can’t hear people’s objections. This seems to be the philosophy of lads. Yet, people are offended. People are hurt and disturbed by their behaviour. Women are degraded, reduced to an object to be obtained through either demonstrations of extreme ‘laddishness’ or saving women from those men by being a nice guy.

Perhaps the most shocking thing I have learnt is that such behaviour is so acceptable. It is taken as a hideous rite of passage that every girl has to go through. Can we really condone a culture that exists within our centres of learning that makes young women merely accept assault as a fact of life? Unfortunately, it appears to be showing no signs of disappearing. This means, terrifyingly, that the men bringing up the next generation will be passing these attitudes on. We, as a society, need to address lad culture before it becomes any more ingrained and acceptable than it already is.

Beth Saward is a first year student doing an undergraduate course in English literature and creative writing. For someone doing such a creative course, she spends far too much time playing PS3 and reading comic books with her biologist friends