Why should I change my name? 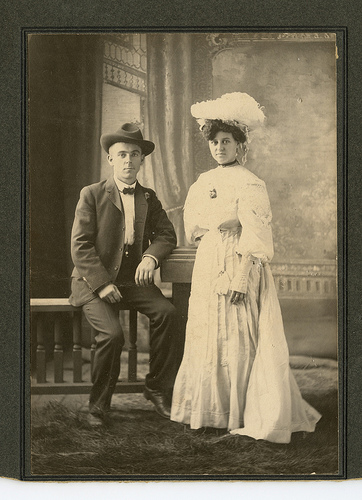 ‘Ooh I have forgotten your married name – what is it?’, one of my colleagues innocently asks. I feel my stomach tighten again and say, ‘I have decided to keep my own name, it hasn’t changed.’ I can see the information sink it as she laughs and flippantly says, ‘Oh yes, I forgot that you were one of THOSE feminists.’

Even in the ‘modern’ and ‘progressive’ age of 2013, women get socially stigmatised for not taking their husband’s name when they get married. A recent poll suggests that more than 90 per cent of women change their name when they get married. Women still receive social judgement when they do not follow the cultural norm. For example in the US, 10 per cent of the population feel that it demonstrates a lack of commitment to the marriage.

My husband Chris and I have been married for seven amazing months today and have been together for seven years. I always knew that if we got married, I wouldn’t take his name and become Mrs McClune. In fact, it was very important to me to keep my own name.

I am an historian. I study, explore and analyse our past, our history. Like many of you, I know the cultural origins of this tradition. For many centuries, marriage was an economic transaction. As simply chattel, a daughter was passed from being the property of her father to ownership of her husband. Husbands effectively bought wives with a dowry. Until the late Victorian era, married women in Britain had very little legal rights and could not even own their own property. In the past, the name change of a woman simply indicated a change in who ‘owned’ her.

Thankfully in the UK today, this is not a reality (yet in many cultures and societies, wives still do not possess much legal status). But after being immersed in studying the past for so long, I can’t shake it off. Assuming your husband’s name is a remnant of a patriarchal tradition which possesses important cultural symbolism, even today.

I am Claire Rush. I have looked at Claire Rush in the mirror for 29 years.

My name is part of my identity. I am much more than a wife. I am a traveller, graduate, global citizen, social justice advocate, garlic-mayo lover… the list is endless. My identity shouldn’t just be defined by my male relations.

I agree with Guardian commentator Jill Filipovic: ‘Your name is your identity. The term for you is what situates you in the world. The cultural assumption that women will change their names upon marriage – the assumption that we’ll even think about it, and be in a position where we make a “choice” of whether to keep our names or take our husbands’ – cannot be without consequence… When women see our names as temporary or not really ours, when we understand that part of being a woman is subsuming your own identity into our husband’s; that impacts our perception of ourselves , and our role in the world… It disassociates us from ourselves and feeds into a female understanding of self as relational – we are not simply who we are, we are defined by our role as someone’s wife or mother or daughter or sister.’

As Claire Rush, I have gained three degrees. As Claire Rush, I have published a book. Why should I change my name? Professionally and personally, a name change has negative consequences in this technological age. For example, it may mean missed job opportunities if someone cannot find you on Google.

And on a practical note – it is expensive and a lot of hassle to change your name. It costs us money to change our passport, our driving license and other professional documentation.

My husband and I discussed the issue of our surname before we are married. I am grateful to have married a man who is secure in his own identity and who did not seem fazed by my wish not to become Mrs McClune. If it had been important to him to share our last name, he would have taken mine. And what about society’s compromise to our predicament? Claire Rush-McClune just doesn’t have the same ring to it? Eh?

Another trend is also immersing in the UK. This year 800 couples in the UK have already merged their surnames together according to the UK Deed Poll service. For example, actor Chris O’Dowd and TV presenter Dawn Porter meshed their names to become the O’Porters. Do you think that this is an innovative compromise? I remain unconvinced.

One group which I love explaining why the name on my Facebook or email hasn’t changed is the young women who I work with. Many of these young women haven’t yet started to question the origin of traditions. They simply accept assuming their future partner’s name as the cultural norm. I LOVE awakening them to the fact that they have choices.

I often feel judged when people scrutinize my decision to keep my own name. So this post is by no means to be judgemental to anyone else, feminist or non-feminist, who has taken their husband’s or partner’s name. Thankfully, feminism gives us choices!

What choice have you made? How have you negotiated the patriarchal traditions of marriage and relationships?

For me, not changing my name was one of the best decisions that I made.

The photo above is of an Edwardian couple in their wedding clothes. Thanks deflam for the photo.