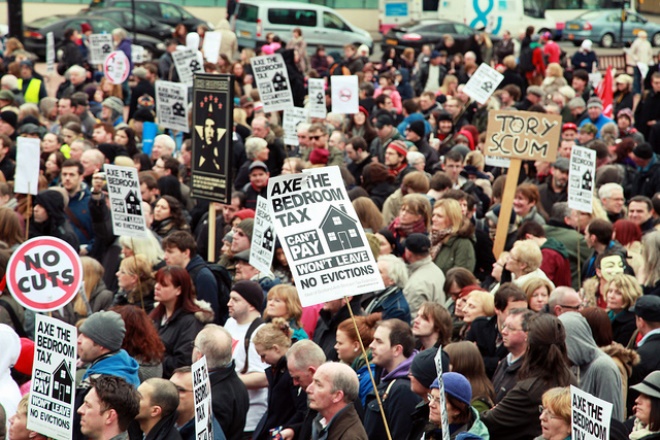 Why you should care about the bedroom tax

This is a guest post by Hilary Wardle. Hilary is a freelance journalist specialising in arts, entertainment and social issues. She runs TV Jam, which takes a humorous look at the world of television, and also Tripadvisaargh: a Tumblr collection of weird and wonderful Tripadvisor reviews. She currently writes for MSN TV, The Guardian, The Independent, Lesbilicious Magazine and a variety of other sites and publications.

When I confidently announced to a friend that I’d be marching against the ‘Bedroom Tax’ in Edinburgh on Saturday I was met with a confused stare. This jolted my world view a bit, as one of the things about Twitter is that – by following like-minded people – you can convince yourself that everyone knows about an issue.

Even more dangerously, you can convince yourself that everyone feels the same way about it as you do.

That was certainly the case where the Bedroom Tax (or under occupation penalty, to give it its formal title) was concerned. The issue of housing benefit claimants being forced to either downsize their property or face swingeing benefit cuts has taken over my Twitter feed in recent weeks, so after I’d reminded myself that not everyone gets their news from social media I was well placed to explain it to my bemused pal, confident that she’d be up in arms too.

So you can imagine my surprise when she didn’t immediately grab some black paint and start making a placard, and instead scrunched up her face and said: “but to be fair, why should benefit claimants be allowed to live in a two bedroom house if they’re single? Or if it’s a single parent with one kid under 10, couldn’t they downsize and share a room with each other?”

Basically – no. The coalition are fully aware that most of these so called ‘under occupying’ people can’t move because there simply isn’t nearly enough one bedroom housing stock in the UK. It’s in very short supply, particularly in the North of England.

These people who can’t move as their housing association or local authority don’t have any smaller properties available are nevertheless announced to have ‘decided’ not to move, that they are under occupying the property and are therefore ‘scroungers’, which is then used as an excuse to cut their benefits by 14 to 25%.

That massive cut was always the goal, but the Tories are hiding it behind language that – yet again- demonises the poor and turns people against benefit claimants.

“What else can we do?” murmur David Cameron and his pet lizard baby Nick Clegg, “these terrible people are stealing YOUR money by living in accommodation where BOTH of their children have their OWN box rooms with no wallpaper or carpets. They – and their prole children – are basically STEALING. Feel free to hate, victimise and blame them among yourselves while we chow down on some more caviar with our tax dodging banker chums. Ahaha. Ha.”

This benefit reduction is a devastating, gigantic cut for people who are already struggling and will force huge numbers of job seekers, single parents, disability living allowance claimants with specially adapted houses and some foster carers deeper into poverty – poverty that in many cases can’t get much worse.

I can personally tell you that there is nothing cushy about a life on benefits, not least because the electricity prepayment meter invariably runs out when you’re in the middle of doing your homework, it’s freezing because the gas has been cut off (and you don’t have carpets), you’re constantly threatened by landlords, bailiffs and – even worse – you have to wear trainers off of the market that say ‘TRAINERZ’ on them instead of Nike and everyone laughs at you in PE.

And that was the luxurious ‘high life’ under New Labour.

Nowadays, many single parent families like the one I grew up in can’t even afford shoes, clothes or food, never mind swanky ‘Trainerz’ brand market-trainers. They’re relying on emergency loans, food stamps and charity hand-outs already, and that’s before the government chops another 25% off what I’ll laughably describe as their ‘weekly income’.

The ConDem government are fully aware that there’s nowhere for the majority of these people to go. They just want an excuse to implement cruel and punitive benefit cuts while simultaneously turning lower and middle income people against the poor and disabled.

Photo of a large group of anti-bedroom tax protesters in Glasgow by Stuart Crawford, shared under a Creative Commons licence. The visible placards read “Tory scum”, “Axe the bedroom tax. Can’t pay. Won’t leave. No evictions” and “No cuts”.