When Catherine Redfern, founder of The F-Word, called me up more than six years ago to ask to meet in a South London pub for a chat, I didn’t know what she was going to ask. I was nervous about meeting one of my feminist heroines for the first time.

I’d already been blogging for The F-Word for a few years, and I thought: oh shit! What have I said? Is she going to kick me off the site?!

In fact, Catherine asked me to take over as editor. I still remember how nerve-wracking that was! I had never taken on anything like editing an online magazine. Seeing my name on The F-Word’s olive green homepage (remember that?!), was still exciting.

That day was the start of a friendship with Catherine (and quickly with a lot of the other long-term F-Word contributors as well!)

And it was day one of an incredible journey for me as a person, as a new editor, and politically as a feminist. I know I’ve come a long way. And, to be honest, I feel like we have as a team at The F-Word, and perhaps even as a community of feminists.

It was the biggest opportunity anyone ever gave me and a massive responsibility.

But today I’m resigning as editor of The F-Word, and passing on the baton.

A couple of things are going on. I’m switching my focus to some new projects, and because I work full time as well as doing The F-Word, it’s all a bit too much at the moment. And I feel like I’ve accomplished the things I wanted to when I took on editing this site. I plan to stay on the collective and will still be involved, just not running The F-Word day-to-day.

Consciously and with the help of others, that started to change. First, the regular bloggers formed a collective, to make decisions about that part of the site. It has been a rocky road at times. We got better. We learnt while we did it, because almost none of us had ever been on a collective before, or tried consensus decision making.

We experimented. We launched a podcast, which was basically some F-Word regulars sat around my kitchen table talking for a few hours about whatever we were interested in right then (editing? schmediting.) I think that was more fun for those of us at the table than anyone who might have attempted to listen.

Other things stuck – we still have comments (it might surprise newer readers that we had a long debate over whether we should!) We solidified as a collective, while I carried on editing features and reviews. Then, more recently, I started to find our amazing team of section editors, who now do the heavy lifting on the long-form articles that we publish on The F-Word. Bringing more people into the process was the decision that most bolstered The F-Word of anything we have done. 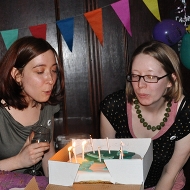 We fundraised to get a professional redesign of the site, and had a hilarious party.

In the spirit of these changes, now I am stepping down, how the site is run will be different as well.

Helen G is stepping up as the first of us to take on editing the site on a rotating basis. Helen will edit the site for at least six months, and then the next person will take over.

A few words on how we believe this will work. All of the section editors and members of the collective can put themselves forward to be a rotating editor. From those who raise their hand, the next rotating editor is chosen at random. We will see how this system works for a while.

Here is a little bit more about Helen, if you don’t already know her from her many wonderful contributions to The F-Word:

Having spent most of her life in rural North Wales where, in between working for architects, she was a three-chord merchant on a variety of musical instruments, Helen packed her spotted hanky on a stick and moved to London 10 years ago as part of a career change into IT work. Currently unemployed, she spends a couple of days a week tinkering with computers in a voluntary capacity at an international aid agency. Music remains an important part of her life and while her listening tastes are eclectic, she has a long-standing penchant for the music of women singer/songwriters across a range of genres.

Helen joined the bloggers’ collective at The F-Word in 2008, taking on the role of events editor in 2011. She sees her stint as editor as akin to sharing the driving on a long road trip, rather than turbocharging the car, giving it a garish respray and taking it for a high-speed joyride through the feminist blogosphere.

At the same time, we have taken the opportunity to refresh the statement of principles of The F-Word, which underpins everything we do. All future editors will uphold these principles.

Finally, we wouldn’t be here at all without Catherine, so I’ve saved the last word for her! (And I promise I didn’t pay her to say any of this…!)

Well, it’s the end of an era… but the beginning of a really exciting time for this website. I’m continually so grateful and amazed at the commitment of our contributors, collective and section editors to this joint project of ours. In 2001 I never would have imagined how far we would come together.

I’m pleased to welcome Helen G as the first of our rotating editors. Helen has been involved with the website for several years now and has put in a great deal of ‘behind the scenes’ work to make sure the site keeps running – crucial, time consuming work that readers wouldn’t necessarily see and that doesn’t get much recognition – as well as contributing great content of course. It’s reassuring to know that continuity will be there as Jess hands over.

I’m excited about the new ‘rotating editor’ system too; it fits in really well to what I always hoped the site would do: promote new voices, and showcase different perspectives and diversity in feminism.

As I know only too well, being editor of The F-Word is incredibly hard work; and with everything Jess did in her time as editor (six YEARS, people!) she really raised the site onto a whole new level, reaching tens of thousands more people and really making the project a real collective, and sustainable, achievement in so many ways. And of course there were major projects like the re-design, as well as the daily work, and stresses and demands of the role as the site (and workload) got bigger and bigger. I have heard anecdotally of many people becoming feminists after encountering the website during Jess’s watch.

(Should I mention, like all of us involved in the site, she did all of this in her ‘spare’ time?)

I was so pleased to hand over to her back then, grateful (and relieved) that she wanted do it, and I often commented to anyone who would listen on how great a job I thought she did.

I don’t think it’s an understatement to say that Jess has contributed massively to the UK feminist scene. What she has achieved is HUGE; she should be proud, and I’m sure anyone reading this can appreciate that. Do me a favour and let her know how awesome she is, yeah?

The F-Word: Our principles

Our aims and objectives:

Our editors aim to:

We will publish strongly held individual opinions, but The F-Word as a publication will not: