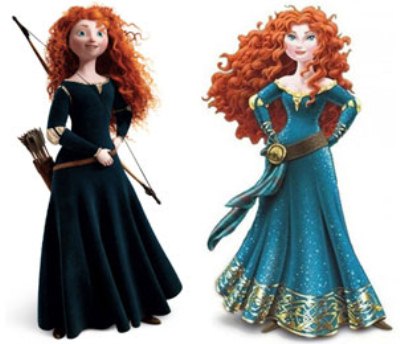 Merida: not the only brave princess

Beth Startin is disappointed with Disney’s makeover of the Brave protagonist, but argues that the other princesses also have their merits and should not be dismissed by feminists. Beth is finishing her second year at King’s College London, loves all things cute – especially dolphins – and tweets here.

I am a feminist and I love Disney, especially the princesses. As I was writing this in my head, I counted the images of Belle in my room – eight in about thirty seconds. Maybe you will read this and think, ‘How can she possibly call herself a feminist when her bedroom bin and her washing basket have Snow White on?’ I can though, and I will tell you why. I got butterflies in my stomach when I saw Tiana at Disneyland Paris, but it’s not just because she’s beautiful.

Disney’s makeover of Merida for her princess inauguration saddened me. Merida is the perfect addition to the princess line up – she is fiercely independent, fighting for her own hand in marriage to prevent a suitor being chosen for her, as well as kind and funny. The animation style of Pixar does mean that she needed to be changed slightly to fit with the rest of the princesses, but Merida’s overhaul went way too far. Her dress skimmed over her shoulders in a way that it definitely did not in the film and she seemingly had a whole new pair of eyes. Her breasts had magically grown and her waist had shrunk considerably. Disney had diminished the charm of their ‘brave’ princess, showing that it is her appearance rather than her spirit that they want to sell to us. Disney claim that their redesign was only intended to be part of a ‘limited line of products’, but I think there are important lessons for Disney to learn from their mistakes.

Commentators on the controversy have tarred the other princesses with the same brush, arguing that only Merida is a ‘feminist princess’ and that the rest are anti-feminist, subservient girls who nobody should look up to. For example, the Guardian called Belle a character limited to only being beautiful. This is simply not true. She is a bookworm, unsatisfied with what she calls her ‘provincial life’ and, just like Merida, independent, unafraid of standing up to the Beast or to Gaston or to anyone else who gets in her way. And what about Tiana and Rapunzel and Ariel? They all have a dream that they want to pursue and do so with ambition and courage, happening to find love along the way.

Tiana, the protagonist of ‘The Princess and the Frog’, is businesswoman first, princess second, not just waiting for her prince but working as hard as she can to get the restaurant she has dreamed of since she was tiny. She spends not one second of the film chasing her prince and it is exactly that, her determination and ambition, that makes Naveen fall in love with her. She is a frog for most of the film, hardly limiting her character to a just a beautiful exterior. The whole point of ‘Mulan’ is to show that anything boys can do, girls can do too. Mulan is a war hero, hardly a passive damsel in distress. It is more difficult to defend the likes of Sleeping Beauty and Snow White, but the fact that they were made so many years ago (‘Snow White’ was released in 1937!) speaks for itself.

What really bothers me about the Merida controversy is that it proves that Disney have the materials to make something which parents do not despair over and girls can aspire to be without thinking solely about their ‘prince’, not just in Merida but in the other princesses too. We know that little girls (and, like me, lots of big girls too) do love the princesses and this does not necessarily have to be a bad thing.

The princesses have elements beyond their looks and their princes that little girls should and could look up to, if only Disney would give them the chance. The problem that Merida’s makeover demonstrates is not one that reflects on the princesses as characters or the films themselves but a problem with marketing. Perhaps it would be nice to see some different combinations of princesses on the huge range of merchandise–Pocahontas and Belle and Mulan–rather than the endless Snow White and Cinderella. A focus on the newer, less traditional princesses could really change the way that the franchise is seen. Merchandise showing them interacting rather than staring blankly past one another could be effective too, suggesting friendship and sisterhood more than the current ‘models at a photo shoot’ look.

Disney should react to this controversy by using the princesses to their advantage, showing little girls that they should aspire to be kind and brave and strong and clever as well as that it is nice to wear sparkly dresses. Let’s not push blame onto the princesses. Making Merida a princess is a great move by Disney and I only wish they would use their power wisely. There is something great to aspire to in the princesses’ personalities, if only Disney would allow us to see past their unrealistically beautiful surfaces. I hope that the 230,000 plus signatures against Merida’s makeover make Disney realise that their audience know that there’s more to being a princess than having a skinny waist.