I’m a big fan of Pinterest. Stop your sniggering! It’s not all “thinspiration” and wedding planning, I’ll have you know. There’s a significant feminist presence in them there hills. I also like to look at clothes, art, photography, find new recipes to try out, explore new places to go, books to read and things to make. Quit your whining. 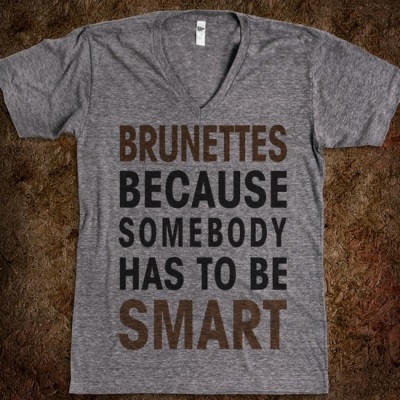 There’s a limit to the volume of Audre Lorde gifs, mind. Whilst browsing through ‘Women’s Fashion’ this very afternoon, I was incredulous to discover not one, but two t-shirts with the following slogans. T shirt-A: “Brunettes. Because somebody has to be smart” [my punctuation]. T-shirt B: “Boys like blondes. Men like brunettes.”

Aside from the obvious question of who the fuck would wear an item of clothing emblazoned with such nonsense, this concerns me. Not only is it anti-blonde sentiment, it’s anti-female. And the two are more closely linked than you might think.

I’m aware that the Aryan archetype has and, sadly, continues to be in some unfortunate quarters, hailed as the zenith of aspiration and human progress and feel as uncomfortable and critical of this as you might expect. However, I don’t believe my objection to these t-shirts lies in some repressed desire to defend the mistaken and ugly “master race” language of racism and ignorance. Rather, I feel this is an issue of sex, gender and that old chesnut: misogyny. This shit runs deeper than the mere hue of your highlights.

When you think about the “dumb” blonde stereotype – and let’s be clear here: it is a stereotype – who do you think of? I’d argue that the image that springs to mind is a female. With the exception of ‘Rocky’ from the glorious Picture Show of Horror, I can think of very few “dumb” blondes who are male. I’d also argue that they’re invariably “dumb” or “dizzy” – as inaccurate, incorrect and potentially insulting as these descriptions are. The stereotype of the blonde is of a female who lacks intelligence. And it’s an image that has global and cultural resonance.

When women and girls talk about other women and girls in relation to them being “blonde”, it’s shorthand for “naïve”, “stupid” or “childish”. I interpret this as internalised misogyny. It’s girl-on-girl hate and it’s whack. 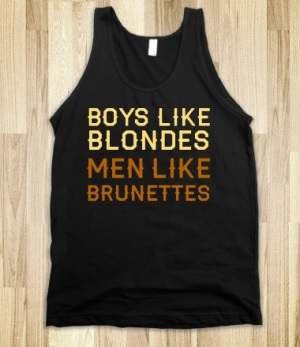 Being told that having fair hair makes you naïve, stupid and childish is another in a series of ways in which women and girls are told that they are inferior, insufficient and inadequate. It’s yet another example of how the already narrow path of acceptability that women and girls tread is growing narrower.

The second slogan that confidently asserts that boys like blondes, whilst men like brunettes further reinforces this. Religion, magazines, politics, fashion, advertising and films proffer limited roles for women and girls, tell them who and how to be and still maintain that being a wife and mother is the ultimate in self-fulfilment and realised womanhood. This godforsaken t-shirt perpetuates this by establishing a status quo that encourages women to value approval and acceptance from males (note: men, not boys) above their own tastes and preferences.

My response to t-shirt A? Well, the full-stop in that slogan is my own. Case closed, your honour. In response to t-shirt B, I posited the radical idea that perhaps judging people based on the colour of their hair is a trifle superficial. Just a thought worth thinking about, maybe.

These are not just t-shirts. These are misogynistic t-shirts.