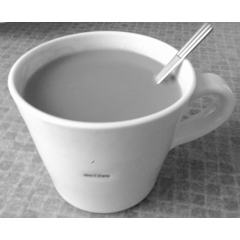 This week’s closing video is ‘Cannonball’ by The Breeders:

Image attribution and description: The image at the head of this post is called First Coffee. It is a black-and-white photograph taken by Helen. If using elsewhere, please ensure correct attribution including a link back to this post:

The image is a photo of a white mug, with the word coffee stamped on its side, containing freshly-made coffee and a spoon. The mug is standing on a chequer-board pattern kitchen worktop.