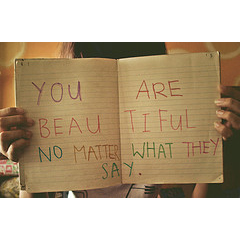 As I packed my bags at eighteen to head off to University, the single piece of advice my mother gave me was to try to make friends with women who were fatter and less attractive. As usual, I rolled my eyes at her ever fatuous priorities, but it didn’t occur to me that maybe it shouldn’t be in the advice package at all.

I’ve always been slightly suspicious of women who are vastly more attractive me, and while most of my friends are much prettier, our friendships usually work out on the basis that none of them believe that about themselves. My relationships with women have often been strained by the feeling of having to compete in more categories than I can keep up with, and the constant worry of letting the side down by being the wrong weight, dressing badly, or failing to carry off the oh-so-painful shoes with the dignity and grace that my elegant friends seem to muster.

That said, despite the tears and misery that the fat feeling generates, I have always marvelled at how other women manage to put up with the way they are treated by men. The constant attention, invasion of space, interaction with people they aren’t interested in at the milder end and the more sinister circling and lying in wait that seems to plague their nights out has always been something I’ve been relieved to be relatively free of. Being less-attractive-than-average has often meant not having to stay more sober than I’d like in order to constantly police my sexual boundaries, not inciting hatred and name-calling from men who I have rebuffed, and generally being left alone to have a jolly good time. It’s probably also saved many a man from a kick in the nether regions, and me from a criminal record.

Recently, I discovered that it isn’t just the clubbing scene that often goes better for the less attractive. I have been introduced to life from the other side of this conundrum by a friend I have become relatively close to at work. I was initially slightly confused as to why this woman would choose to strike up a friendship with me – I am less attractive, more overweight, less well dressed and therefore less ‘cool’ (or whatever the word for that is now) than she is. I was astonished to hear of her experiences with friends – that she was frequently banned from seeing male friends by their girlfriends, had her sexual morality publicly interrogated in person and behind her back, had been isolated from male friends by her partners and excluded and bullied by groups of women who felt threatened by her presence. She has also had to deal with being frequently patronised and talked down to and constantly feeling the need to demonstrate intelligence, which she is so often assumed to lack. Unsurprisingly, all of this had culminated in a very isolating university experience in which she had had little support.

This is a difficult situation to address. Anyone who comes to the conclusion “people hate me because I am attractive” is likely to be knocked down as being arrogant and in any event not considered attractive enough for that to be the case. In the same vein, women who we perceive as being advantaged over us by the status that beauty gives may not immediately incite sympathy. Yet this is a real phenomenon which can cause women pain and isolation, and it is something that we, as women, *are* doing to each other. We may not be responsible for the patriarchal system which values women on the basis of looks and sets us up in competition with each other, but we can change the way we relate to each other on an individual basis and take the time to unpick where our judgements come from. Maybe we need to learn to own our ugly privilege and think through why we are excluding people. Maybe that girl who spends all her time with men who fancy her is there because we’ve given her the cold shoulder, not because she wants to get one up on us.

Image attribution and description: The image at the head of this post is called You Are Beautiful. A person (hidden) is holding up a lined exercise book inscribed with the words ‘You are beautiful no matter what they say’ in capital letters of different colours. It was modified by Helen from an original photo by La Melodie under the Creative Commons Attribution 2.0 Generic (CC BY 2.0).