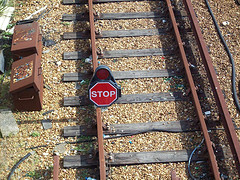 “What’s actually happening”: calling out transphobia in the workplace

I am cisgendered and consider myself an ally to trans* individuals and causes (though I wish we didn’t have to announce that we’re trans* allies – that it was just everyone’s default position). I believe that one of the things cis people can do to help the trans* community is call out transphobia when we hear it. That could mean cutting in when someone is telling a transphobic joke, not allowing transphobic content to spread into our region of Twitter or Facebook, or making sure the people we work with are aware of transphobic language and know not to use it. Really, this shouldn’t even be considered “ally work” – these ought to be common sense actions that cisgendered people just do. Unfortunately, however, transphobic language, jokes and behaviour still loom large pretty much everywhere, and are a particular problem in the workplace.

Recently, I sat in an audience of several hundred people at a training day, and listened while the speaker made a joke featuring a transphobic slur. He got a big laugh. Afterwards, the speaker encouraged us to visit his social media outlets in order to send him feedback. When I logged onto Twitter, and checked out the comments below a blog about the event, I noted that at least one person had already called out the transphobic joke. I also called it out, happy not to have been the only person who’d been disturbed.

To his credit, the speaker offered an apology. I felt hopeful that by calling out the joke, my colleagues and I had convinced him to remove it from his usual routine. However, the reaction of various bystanders to the act of calling out rapidly became more disturbing than the joke itself. Immediately, I began to receive tweets that claimed I was being hyper-sensitive and childish. “We are all adults and I am sure we can cope!!!”, wrote one respondent in the blog comments – the three exclamation marks presumably intended to show just how ridiculous those who’d called out the joke were being. Another response suggested we “keep eye on ball [sic] and worry about what is actually happening”, implying not only that transphobia isn’t important but seemingly suggesting that it doesn’t “actually happen”. When I attempted to explain on Twitter why the joke was problematic – and why attempting to silence those calling it out was even worse – I was told by one tweeter that he and I were now “enemies”. A worrying response, given that I share a workplace with this person.

The point of this anecdote is not merely to show that transphobia is a massive problem, though it does highlight how readily people will use, defend and overlook transphobic language and behaviour. The thing that struck me about the exchange was how difficult I found it – and the responses I received assumed I was cisgendered, meaning they were probably far more pleasant than they might have been had I been trans*. According to the 2007 Equality Report, 73% of transgender individuals experience regular harassment in public spaces. Over 10% reported verbal abuse in their workplace and 6% reported physical abuse there. 25% of the report’s respondents claimed that they felt a need to change jobs following harassment or bullying. 20% said they had been excluded from their local community. Press for Change’s 2009 report into transphobic hate crime in the EU found that the UK is the worst EU country when it comes to verbal and physical abuse of trans* individuals. It also found that the workplace is a particularly dangerous sphere: at least 10% of the transphobic abuse that occurs there would constitute a hate crime if reported. My calling out of the transphobic joke was interpreted by one of my workmates as a desire on my part to “make an enemy”. The fact that I still feel confident enough to go to work might well have a lot to do with the fact that, as a cisgendered person, I have no reason to assume that my workplace wouldn’t be a safe space.

Calling out transphobia shouldn’t be this hard. My colleagues and I should have been able to raise our concerns with the event speaker, hear his apology and leave it at that. The people who responded angrily to our calling out of the joke should have been responding angrily to the joke itself. We should all be working together to tackle the horrendous figures I’ve cited above, by making allegiance with trans* people our default position. Everything that happens in our workplaces should reflect current Equality & Diversity policy and legislation. Yeah, there may be fewer “jokes”. But we can live with that, right?

Image shows a stop sign on a train track. Used under a Creative Commons licence, with thanks to Secret Pilgrim.