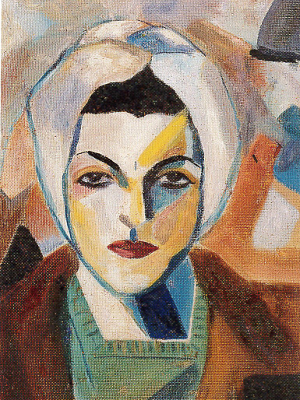 An exhibition of one’s own

The Saloua Raouda Choucair retrospective at Tate Modern, the artist’s first world solo exhibition, is spellbinding yet melancholy. The show comprises of over 120 works (some never seen before) and displays her spirit of abstraction through Arabic visual and geometric art.

Choucair was born in Beirut in 1916 and began painting under the guidance of leading Lebanese landscape artists. After studying at the American University in Beirut and the École des Beaux-Arts in Paris, she went on to attend the studio of one of the progenitors of pop art, Fernand Léger. During this time, she learnt how “the human form becomes an object” and how it “could considerably liberate possibilities for the modern artist.” Léger’s influence runs throughout her first solo exhibition at a world class museum, with the mechanisation of the female form and the conceptualisation of urban society woven into her art.

The most explicit influence of her Parisian education is projected in the most conspicuous painting of the exhibition, ‘Les Peintres Célèbres’. ‘Les Peintres Célèbres’ sets a scene of domesticity more than likely based on the Léger’s ‘Le Grand Dejeuner’, a large painting depicting a harem of three naked women having tea around a small table. Rather than recreate the scene, which was meant for the male gaze, Choucair conducts a “delibrate, feminist ‘de-Légerisation'”. The female forms are softened to reveal a human geometry within their relaxed rested positions. The angular shapes of breasts are there to differentiate rather than sexualise. She manages to create an image where the figures are gazing out at us, with much uncertainty about who is observing who.

Choucair demands the viewer objectifies the object, not the female form

However, the motif of a deep, blood red check tablecloth intrudes throughout the series of paintings. It shows the burden of the female body: menstruation. The domesticity of life as symbolised by the tablecloth means it is just as inevitable for a woman as her monthly cycle. 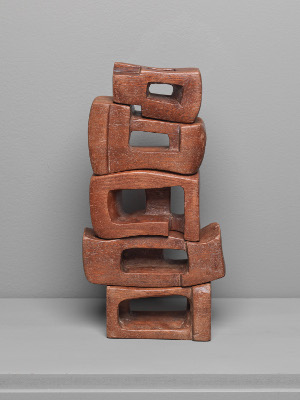 Choucair’s nude studies lead on to ‘Nude with Roses’, ‘Nude with Irises’ and ‘Nude with Trees’. The colour red dominates each painting, maintaining the theme of menstruation. However, the appearance of a plant in each work draws the eye away from the woman. This shows a forceful, new dialogue with abstraction; Choucair demands the viewer objectifies the object, not the female form.

Choucair’s daughter emphasized the duality of her mother’s sculptures: “You feel she played a lot and had much joy working. However there was frustration of not being able to express her ideas on an urban scale.” There is a sense in the sparseness of space in the second room of the deterioration of potential. Many of Choucair’s sculptures expose her interest and knowledge in architectural forms and sensitivity to her environment. Yet the vast, cavernous space of the room gives a feel of lack. There is a sense that she is not fully complete; her white, Western male contemporaries have seen greater success. This is even more emphasized as she plays second fiddle to Tate Modern’s main headliner, American pop artist Roy Lichtenstein.

However, this exhibition is very much about Choucair, with the use of the self portrait as the Tate’s promotional image. It is also the most powerful piece of the show, primarily because of the passivity of the work and Choucair’s cool, hard gaze. Her gender is also ambiguous, as she seems to sport a black moustache over her voluminous red lips. The slight hint at masculinity suggests that Choucair, alongside the viewer, objectifies the artwork in the first room. The curation becomes a commentary on the progressiveness of the female artist, how the singularity of the self-portrait allows the manifestation of an equal power between the gazer and the gazed. 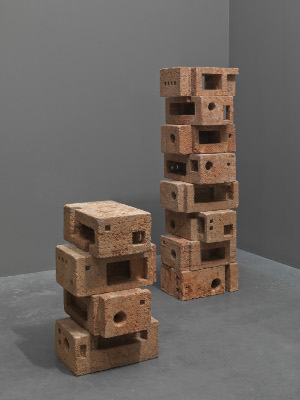 We do not linger over the curves of the female body that are prominent in Choucair’s paintings, but rather the composition of women in their social realms. Choucair’s bodies are bloodless but not at all passive. The voyeur is fixated on the actions rather than the female form.

The last room of the exhibition expands the theme of complexity and tension between structures. The darkened room, filled with metallic, wiry sculptures, embraces the contortions of feminine shapes. Choucair has produced the curves of hips and the curls of hair in mythical and synthetic structures. The infinite possibilities of interpretation and perception enabled by the room’s layout, juxtaposes that of the limited possibilities of Choucair herself.

This major exhibition is the first time that Choucair has been allowed to expose the limitlessness of her work, and is a testament to all female artists who garner an exhibition of their own. As the first in a series of exhibitions by Arab and African artists whose work is generally unknown in the UK, Tate Modern seems to have taken a more liberal approach to the schedules, reaching beyond the expected, familiar and already-celebrated. It takes patience and deep absorption to fully understand Choucair’s often subdued work, which is a clever polarity to the gaudy, primary colours of Lichentenstein. However, this patience is rewarded with an insight into a complex and intriguing artist.

The exhibition will be showing until 20 October.

All pictures are used with the permission of Tate and are © Saloua Raouda Choucair Foundation.

Nikki Hall is a writer and journalist.