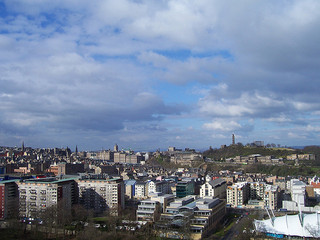 I’ve always been happy to live in a city that is relatively safe for sex workers. Edinburgh was the first city in the UK to offer licences to saunas, way back in 1986, which allowed such establishments to operate just-about-within the law. Sometimes also referred to as “brothels”, saunas are places where sex workers can operate with some degree of safety. They provide an agreed location for clients to attend, facilitate communication between sex workers and foster a support network. Many encourage STD testing, operate safe sex policies, and provide security options like bouncers or panic buttons for their workers. They’re not perfect, but crucially, saunas prevent sex work from disappearing underground entirely.

No matter what your view on prostitution, if you’re a feminist, your primary concern ought to be the wellbeing of the people (mostly women) who make their living as sex workers. This ought to include listening to the voices of these individuals, and allowing them to speak about their experiences. Which is why I was absolutely enraged to read about the Edinburgh sauna raids that took place over the past weekend.

According to the Herald, seven city saunas and eleven other addresses were targeted in a string of raids, in which sex workers were ejected from the buildings, questioned and searched. Although it’s unclear whether any sex workers were arrested, Lothian and Borders Police did release a statement saying they had charged three individuals with drug-related offences and confiscated “assets” worth over £500,000. Some workers took to Twitter to reveal that these “assets” included private mobile phones and DVDs belonging to the women involved – bizarrely, condoms were apparently also confiscated. Glasgow sex worker Laura Lee tweeted on behalf of a friend caught up in the raids, “I wish they would leave us alone and let us work.”

However, the voices of the workers whose doors were kicked in were conspicuously absent from all official coverage of the event. In fact, the overriding message was one of privileged individuals in positions of authority speaking and acting on behalf of these – they assumed – women. The Herald article opens by suggesting that the police officers who broke into the various targeted addresses were actually just chaperones – they “accompanied” social workers, who were apparently on the scene “to help potential victims”. Elsewhere in the same article, former councillor Marilyne MacLaren referred to the sauna workers as both “vulnerable people” and “vulnerable women”, and numerous other spokespersons for local government and the police weighed in on the issue. As is often the case, sex workers themselves were left out of the discussion, while others rushed to brand them as helpless victims in drastic need of salvation.

Marilyne MacLaren is right: sex workers are often vulnerable people (although it’s more accurate to say that the work they do could sometimes, potentially, put them in a position of vulnerability). Why, then, should they be treated so differently from other vulnerable people in society? If you believe a person’s personal safety is at risk, how is it helpful to kick down their door, drag them into the street, interrogate them, confiscate their personal property and – temporarily or permanently – shut down their place of work, leaving them in a position of extreme economic uncertainty? High-profile sex work advocate Dr Brooke Magnanti tweeted in the immediate aftermath, “Edinburgh sauna raids: rescuing literally zeroes of people.” She went on to point out that “raiding their workplace and confiscating their income” is hardly a good way of “ensuring worker safety” and claimed that the raids were actually “harassment under the guise of ‘protection’ and ‘concern,’ unnecessary and intended to frighten workers”. Laura Lee agreed, tweeting, “they could have formed a working group to tackle coercion and went in with sex workers, but no – drag them out onto the street”. For people who claim to be passionately committed to preventing violence against women, this approach does seem hypocritical.

Edinburgh sex workers have repeatedly spoken out about saunas and the vital safe community space they provide. However, as these raids show, taking these actual, publicly voiced needs into account is not important to the authority figures who supposedly value the wellbeing of sex workers. Instead, the implication is that sex workers are too weak or stupid to understand the situation they are in; or, if they do understand, they are too weak or stupid to figure out how to ask for help, so help must be forced upon them by kicking down a locked door. The fact that sex workers have asked again and again for help – specifically, asked to be listened to, worked in partnership with and respected by non-sex-workers – is apparently irrelevant. The Edinburgh raids are a disturbing reminder of how vulnerable sex workers can be – not always at the hands of their industry, but rather at the hands of their supposed saviours.

Image shows the Edinburgh skyline. Used under a Creative Commons licence, with thanks to Andrew Bowden.