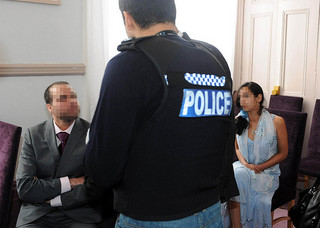 Another face of marriage inequality

Credit where it’s due: under this government, the Marriage (Same Sex Couples) Bill has been making its way through Parliament, addressing a grotesque injustice that has been allowed to stand for far too long. But though the coalition giveth with one hand, with the other it taketh away. There is another form of marriage inequality it has been all too happy to promote.

A year ago, I wrote about the (then) proposals to introduce discriminatory family migration rules preventing British citizens and permanent residents from bringing non-EEA partners and/or children into the UK, unless they could meet certain prohibitively high and arbitrarily defined income thresholds. In effect, family migration was only to be available to the wealthy. Others must choose between leaving their home and leaving their family.

Shortly afterward, these proposals became a reality; and although the income thresholds are slightly lower than those originally floated, the results have been as inhumane as the JCWI and other campaigners warned. The All-Party Parliamentary Group on Migration, which looked at hundreds of submissions, has published its report today:

[T]housands of Britons have been unable to bring a non-EU spouse to the UK since July 2012, when minimum earnings requirements were introduced. …

Forty-five claimed their inability to meet the income threshold had led to the separation of children, including British children, from a non-EU parent.

In one case, a woman from outside Europe was separated from her British husband and two sons, including a five-month-old baby she had been breastfeeding.

Others affected by the policy include a father whose six-month-old son cannot join him from Nigeria and a pregnant woman whose husband may be deported to Japan at any time. Regional variations in income mean that there is a particular negative impact on those living outside London and the South East.

It seems that if these people were allowed to be with their loved ones, it would threaten the interests of the “taxpayer”, a far more important figure than the partner, parent or child. “Taxpayer” is of course a rather slippery word, since some of those reporting difficulties are in full-time employment at or above the national minimum wage. The parliamentary committee estimates that 47% of the UK working population could not afford to bring in a non-EEA partner. Essentially, the right to family life is not a universal one, but parcelled out by class.

“Families,” David Cameron once said, “are the most important institution in our society. We have to do everything in our power to strengthen them.” Perhaps that is why his government has implemented a regime which, by its own estimates, threatens to tear the families of 18,000 British people apart.